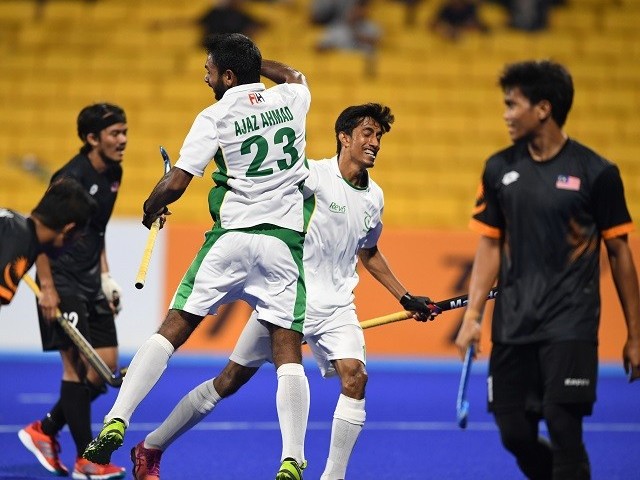 Pakistan's Ajaz Ahmad (3L) and Muhammad Atiq (2R) celebrate after score a goal against Malaysia during the men's hockey pool B match in Jakarta on August 26, 2018. PHOTO: AFP

ISLAMABAD: A 13th ranked Pakistan team recorded their fourth win in a row in the men’s hockey competition of the Asian Games on Sunday as they thrashed 12th ranked Malaysia 4-1 in Jakarta.

Both the teams have qualified for semi-finals of the competition after the preliminary round, in which Pakistan will now play their last match against Bangladesh on Tuesday.

For Pakistan, Ejaz Ahmed scored two goals while Mubasshir Ali and Mohammad Irfan hit the goal post once each.

Pakistan won all their first three matches with big margins – 10-0 against Thailand, 10-0 against Oman and 16-0 against Kazakhstan.

The semi-final is scheduled to take place on August 30, with the final to be played on September 1.