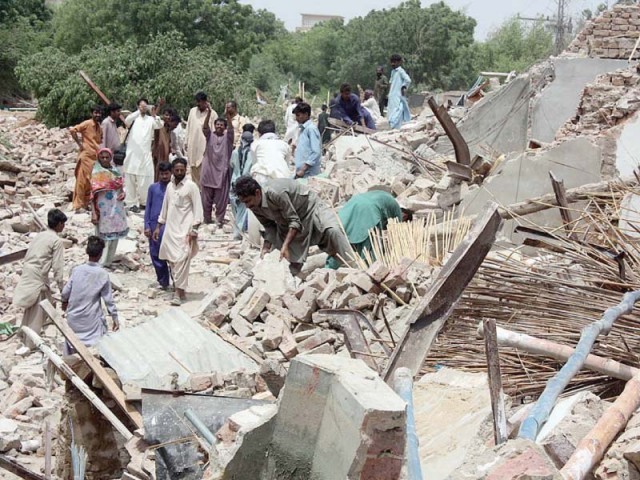 The district administration employed four cranes for the demolition operation which was led by Assistant Commissioner Sarah Javed. The residents were served prior notices for evacuation. PHOTO: APP

HYDERABAD: As the alleged encroachment delays construction of a new water filtration plant in the Hussainabad area of Hyderabad, an anti-encroachment operation was carried out on Saturday.

Facilitated by the district police, the anti-encroachment cell demolished and damaged nearly two dozen houses before the resistance from the local community forced them to stop the operation.

The district administration employed four cranes for the action which was led by Assistant Commissioner Sarah Javed. The residents were served prior notices for evacuation.

According to Water and Sanitation Agency (Wasa) Managing Director Masood Ahmed Jumani, the plant will be built on 17 acres of land among which between five and six acres are under encroachment.

He said the operation will continue despite resistance as the Supreme Court-mandated Judicial Commission on Water and Sanitation has also ordered timely completion of the project. The provincial government approved construction of the plant at an initial cost of Rs800 million in the fiscal year 2017-18.

However, the project’s execution has been delayed for months due to the allegedly illegal occupation of the land. The residents of Abhayo Shah Colony in Hussainabad, who were protesting the operation, claimed that only around a dozen houses were built on the encroached land.

“We are living here for 40 years. But now the government is razing our houses under the pretext of encroachment,” said Abbas Pathan, a resident. He claimed that only around 15 houses were built on squatted land but the district administration razed and damaged around 50 houses on Saturday.