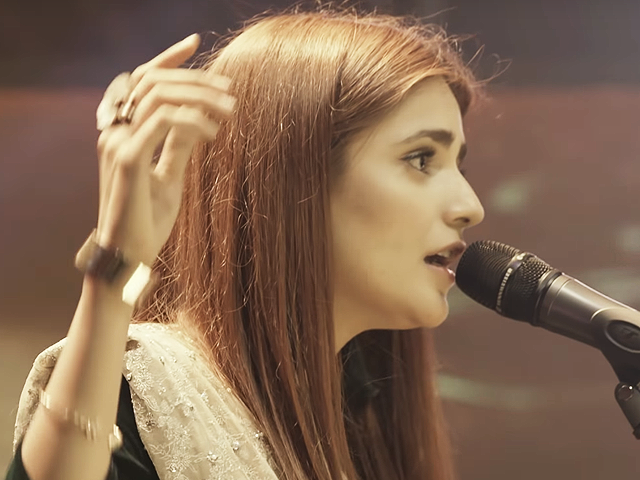 KARACHI: The third episode of Coke Studio season 11 was titled ‘Rung’ and comprised of three songs. While the first two episodes were generally disappointing, the third marked a much-needed change of flavour.

All three tracks spoke of love in a worldly as well as divine connotation and brought the acclaimed music platform back on track.

We began the episode with Fareed Ayaz, Abu Muhammad Qawwal and brothers as they crooned Bulleh Shah’s kalaam Piya Ghar Aya. The iconic kalaam already has a trance aspect to it and the qawwal brothers simply added more. It has a divinity which extends beyond the composition’s foot-tapping and trance quality. This Coke Studio rendition of Piya Ghar Aya felt like the old Coke Studio we all loved.

The father-son duo of Attaullah Khan and Sanwal Esakhelvi performed Attaullah’s Saraiki folk composition Allah Karesi with a fascinating new EDM packaging. The experimentation the producers are bent on doing this season, trying out different kinds of fusions, paid off this time.

Allah Karesi works because one section doesn’t try to overpower the other. The EDM samples don’t dominant the original composition; rather it supports it. The track is a good example of what, when and how much to use without creating a musical cacophonous (it could have easily tripped into that territory) clash. It has also been kept short and sweet.

Sahir Ali Bagga gave us the best song of the season so far with Roye Roye. He himself crooned the track (and also wrote and composed it) alongside Momina Mustehsan. The two soulful voices smoothly gel with each other and into the composition.

The song, at its core, has a beautifully simple and yet, haunting tune. It begins as Rufus Shahzad plays the same five core notes on a keyboard. Baqir Abbas joins in with bansuri and we take it from there, until Bagga begins the opening verse.

The beauty of Roye Roye lies in that it induces nostalgia of the old school Pakistani and Indian songs and yet, mixes with the modern instrumentation and becomes as contemporary as ever. This, for the first time in the entire season, feels like the producers didn’t try to force the song to be something else other than what it is. And the result is the cleanest and the finest composition.

Roye Roye is not only moving in its lyrics, but the arrangement of the song is such that the sounds don’t clash with each other but working to support the two vocalists. Mustehsan sounds equally wonderful, even though she misses notes in a couple of places.

After what was a generally disappointing start to the season, Coke Studio is somewhat back on track with episode three. The Esakhelvi duo brought something fresh, Fareed Ayaz, Abu Muhammad Qawwal and Brothers gave us a taste of what we originally loved about the show, and Bagga topped it all off with a melody nostalgic of an era long gone.

Women don’t have to pull down other women to be better: Sushmita Sen