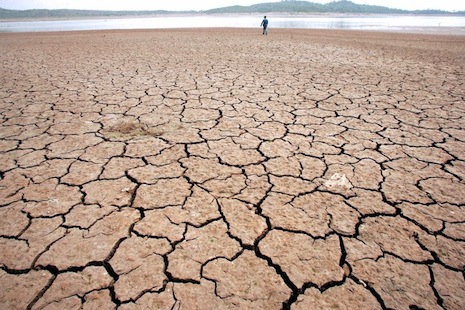 HYDERABAD: While the Sindh government has declared a drought for the desert areas in Tharparkar and Umerkot districts, the people living in equally miserable conditions in Achro Thar [white desert] in Sanghar district have been neglected. Locals claim that identical drought conditions exist in Achro Thar which is spread across seven union councils in Sanghar and Khipro talukas.

However, five of the UCs are said to be the most affected owing to the lack of rainfall this monsoon season. “Due to low rainfall, the crops couldn’t be grown and there is no water for humans and livestock alike,” said Khuman Singh Chandarveer, a local resident.

He pointed out that according to the law, the government is supposed to declare a drought if the region does not receive the required amount of rainfall by August 15. He said under the same rule, Tharparkar and Umerkot have been given the status of calamity-hit.

After this announcement, the Sindh cabinet on Monday approved the provision of subsidised wheat to 323,435 families in Tharparkar and 43,240 families in Umerkot. Each family will receive 50 kilograms per month. The meeting also directed the deputy commissioners of Sanghar, Jamshoro and Dadu districts to submit report about the conditions in Achro Thar, Kohistan and Kachho.

Abdul Hameed Samo said the hunger and highly turbid drinking water are causing illness among humans and livestock. “The rainfall fills the ponds and lakes charge the wells. And the long dry period dries them all.” According to him, livestock breeders are migrating to other places in search of water and fodder.

In March this year, Pakistan Peoples Party chairperson Bilawal Bhutto Zardari inaugurated a Rs3 billion water supply scheme for Achro Thar. Through the pipelines stretching to around 240 kilometers, the plant in Jalalabad supplied water to more than 100 villages in Bilawal Hongorjo and Kamil Hingorjo UCs, both of which consist of around 200 villages.

Chandarveer said the water supplied to these villages is not sufficient for livestock consumption and for growing pastures. “A majority of the villages in Achro Thar are still not connected with this scheme.”

Pureji Singh, another resident of Achro Thar, urged the provincial government to start preventive vaccination of the livestock before they get sick with fatal illnesses.

Sanghar deputy commissioner Liaquat Ali Bhatti told the local media that the district administration will survey the desert and report to the provincial government about the prevailing condition. Bhatti has already written a letter to the Board of Revenue, apprising it of the prevailing conditions and recommending that the areas be declared calamity-hit.