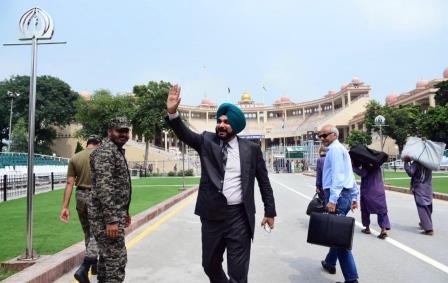 “S (I wish Imran Khan will take steps for betterment of his nation)…I spent a great time in Pakistan I realized Pakistan is a safe country. Cricket teams should come to Pakistan. Bye bye Pakistan,” he further tweeted.

Before leaving for the Wagah Border, Sidhu went to Taxali Gate, which is a famous place in the walled city to buy Khusa, a traditional Punjabi shoe that is made of leather and has embroidery on it. He also talked to the people who took pictures with him.

The former Indian cricketer met Chaudhry Sarwar, who is an expected candidate for the Punjab governor position. Sarwar was accompanied with his wife.

Both discussed issues related to their nations and expressed best wishes for the two countries.

Sidhu was the only Indian cricketer who visited the oath taking ceremony of the newly-elected PM Imran Khan. During the ceremony he also met the Chief of Army Staff General Qamar Javed Bajwa.

However, Sidhu has come under fire from hardliners in India for his Pakistan visit and especially for hugging the Pakistan army chief.

Sidhu sought to soothe the frayed tempers saying that Pakistan’s services chiefs met all the guests sitting in the front row at the ceremony.

He said that he had met the chiefs of Pakistan’s navy and air force, and not just the army chief.

The former cricketing star said that peace and dialogue is the only way to normalize the relationship between the two countries.

He also laughed off criticism from Indian politicians on his visit and said that he would not comment on BJP politicians’ remarks that Sidhu’s attendance at Imran’s swearing-in was an act of ‘disloyalty’.

As Pakistan gears up for economic challenges, there are key lessons