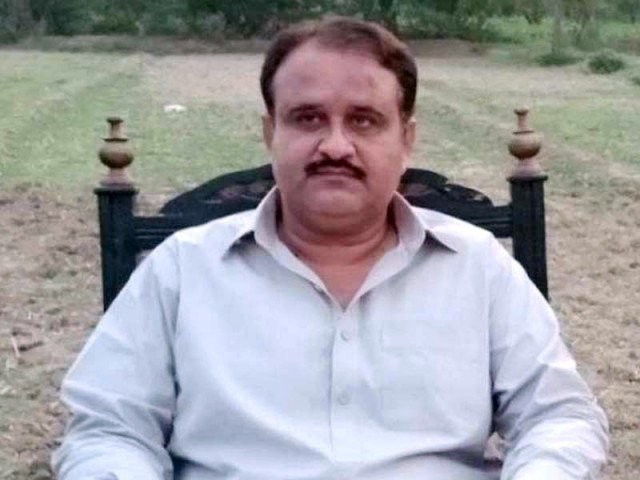 Although the number of lawmakers on the treasury benches was greater than those on opposition benches, they were unable to counter the ruckus created by the opposition.

Some lawmakers looked visibly dejected. They watched the entire process like spectators.

In a goodwill gesture, the newly-elected chief minister shook hands with Hamza Shehbaz Sharif, Khawaja Saad Rafique and others. But he was not greeted in the same manner by PTI lawmakers.

The election for the slot of the chief minister was supposed to start at 11am on Sunday, but the proceedings were delayed by at least an hour. Members on the opposition benches protested against the delay and cordoned off the speaker chair.

This brouhaha lasted for some 12 minutes. The session started at 12:12pm.

PML-N’s former education minister Rana Mashood Khan maintained that PTI’s MPAs tried to change the candidate for the post of chief minister because they had strong reservations against him.

He said most PTI MPAs were against Buzdar’s nomination.

After the assembly’s secretary read the rules of the election, Speaker Chaudhry Pervaiz Elahi ordered to ring the bells for five minutes to allow members outside the house to attend the session and participate in the voting process.

Later, doors were locked and lawmakers started casting their votes.

Votes were counted at 1:17pm and bells were rung again to allow the lawmakers who had left the assembly hall after the voting process to return.

The protest stopped at 1:43pm.

Pledging to end the status quo, he said that even his friends questioned his nomination, insisting that his nomination was without merit.

Echoing Imran Khan’s words, he said he had been nominated because he belonged to an underdeveloped area.

He said he realised that Punjab was a large province and afflicted by a host of problems.

Pledging to follow Imran Khan’s vision, he said all issues would be amicably resolved.

Good governance, he said, was his government’s priority, adding that the performance of the police department would be improved just like his party had done in Khyber-Pakhtunkhwa.

Stressing the need to root out corruption, he said alleviating poverty would be among his government’s top priorities.

Promising to make Imran Khan’s vision a reality, he said the PTI would usher in an era of prosperity and development across the country.

Thanking members of both the treasury and opposition benches, he said that a good team would be introduced to ensure real progress in the province.

He urged members of the opposition to provide him with positive feedback and suggestions.

Stressing the need for setting up a parliamentary commission to probe what he termed rigging in the general elections within 30 days, he said that the opposition would not sit until the truth surfaced.

Wondering why the Election Commission of Pakistan’s (ECP) RTS system failed, he pointed out that the commission had spent Rs21 billion on the entire polling process.

According to him, the PML-N’s polling agents were expelled and they were denied ‘Form-45’.

Thousands of FIRs had been registered against PML-N workers, he maintained.

He said despite everything, PML-N had emerged as the second largest party in Punjab.

“Stealing our mandate is not a good omen,” he said.

Hamza said that he prayed that Imran Khan fulfilled his promise of providing 10,000,000 jobs and building 5,000,000 houses, hoping that it would not be anything like METRO project in K-P.

Some PTI MPAs openly expressed their opposition to Buzdar’s nomination. They insisted that if someone who had pending cases against him could be nominated as the chief minister, then why not Aleem Khan.

Some said that they could not do anything at this stage other than vote for him.

Candidates for the post of the chief minister who were tipped to be media favourites included Abdul Aleem Khan, Mian Aslam Iqbal, Yasir Humayun, Hasnain Dareshak, Dr Murad Rass and Dr Yasmeen Rashid among others.

All of them chose to remain silent and were inactive during the assembly session.

Most of them did not turn up in the house after Buzdar’s name was announced as victor.

‘Pay taxes, I will protect your money’: PM Imran to nation