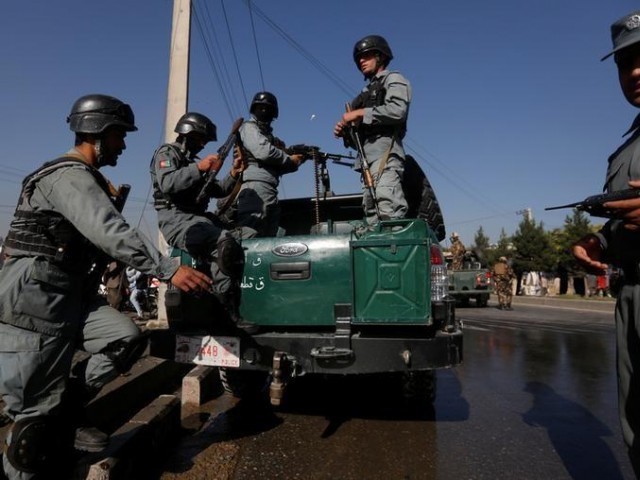 Afghan police have said that the attackers were firing rocket-propelled grenades. PHOTO: REUTERS

KABUL: Gunmen attacked an area around a training centre for Afghanistan’s intelligence service on Thursday in the capital Kabul, an official at the centre said.

Staff and officials at the centre took shelter in a protected area of the compound as gunfire came from a half-finished building near the site. Kabul police spokesperson Hashmat Stanekzai said the attackers
were firing rocket-propelled grenades and other weapons but it
was unclear how many gunmen were involved.

The area around the site was closed off but media reported that gunfire and at least one explosion could be heard. There was no initial word on any casualties or claim of responsibility.

Military and intelligence facilities in Kabul have been regularly targeted by military. The latest incident comes at a time of high tension following a series of attacks including a full-scale assault on the city of Ghazni last week.

Afghan authorities had earlier revised down the death toll from a separate suicide bomb attack on an educational centre in Kabul to 34 from 48, health ministry officials said. Islamic State has claimed responsibility for the attack.

Some bodies had been double-counted when they were being taken to hospital from the blast site following the attack on Wednesday, the ministry said. The injury toll was revised to 56 from 67.

Most of the victims were students preparing for university entrance exams in a classroom at the Mawoud Academy in an area of west Kabul where many members of the city’s Hazara community live.

Investigators said the bomber entered the centre from a rear entrance and made his way into a classroom where more than 100 students had gathered. Their funerals were due to take place on Thursday.

There has been no claim of responsibility but the Taliban denied carrying it out. The Hazara have often been targeted by the Islamic State. The blast was the latest in a wave of attacks that have killed hundreds of civilians, soldiers and policemen over recent days.