Says it is ‘our nation­al duty’ to plant more trees
By Mamir
Published: August 16, 2018
Tweet Email 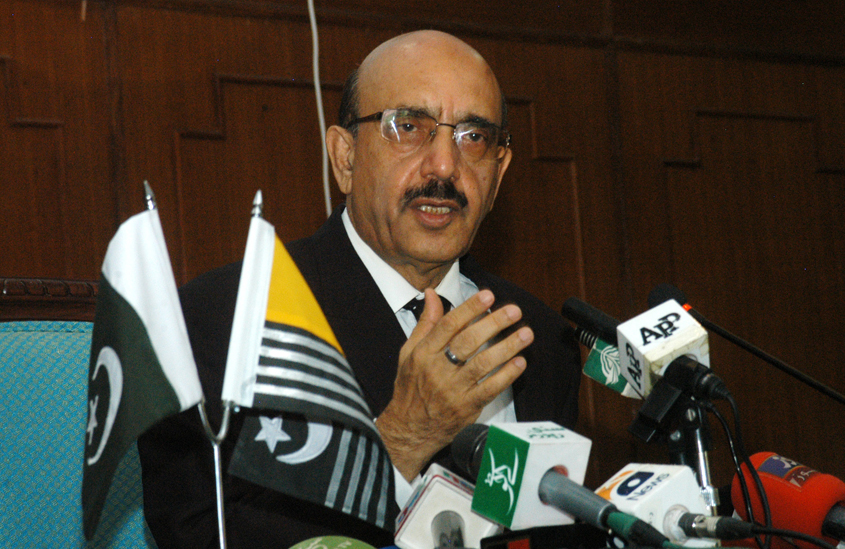 Talking to newsmen after inaugurating the Tree Planation Drive by planting a sapling in the lawn of President House, he said that the “drastic climate changes taking place at the global level in general and in Pakistan in particular are matter of great concern for us.”

“AJK once famous for its beautiful green forests is increasingly facing deforestation for different reasons. It is high time to plant more trees to keep the beauty of the area intact and to combat the climate changes,” he added.

He said that the depletion of forests not only causes devastating floods, droughts and famine but also creates serious environmental and health problems. He added that trees are crucial for the health and well- being of people, wildlife and our planet.

“It is our national duty to plant more trees on one hand and conserve the existing forests on the other to prevent impending disasters,” he said adding “the people should turn to alternate sources of energy and must avoid cutting of trees to use them as fuel wood.”

The president said that the government can assist people of remote areas like Neelum Valley to use liquid petroleum gas (LPG) in place of forest wood to save the precious forests of the area. He also stressed upon media, social organisations and civil society to sensitise the people by creating awareness about the importance of forests.

Later Secretary Forests Syed Zahoorul Hassan Gillani called on President and apprised him that 27 per cent area of AJK was under the thick forests. Last year tree plantation was done on 38,000 acres of land with the cost of Rs16 million.

The Secretary told the president that last year’s tree plantation at massive scale was done with the help of communities and financial assistance from Flood Emergency Resilience Response Project (FERP). This year plantation will be done on additional 6000 acres and Rs 140 million has been allocated for this purpose, the secretary said.

He said that the Forests Department has also started work on construction of a recreational project at Brura (Zamin Abad) located along the Muzaffarabad-Kohala Road. This forest project will have small zoo, park and cafeteria where 3.6 million trees will also be planted.

The Forests Department will also collaborate with the armed forces of the country in their tree plantation drive at eight different areas of Azad Kashmir by providing around half million saplings.

“AJK also seek cooperation from the provinces of Pakistan in the areas such as flood prevention, de-silting of rivers, land stabilisation and economical use timber,” the secretary forests added.