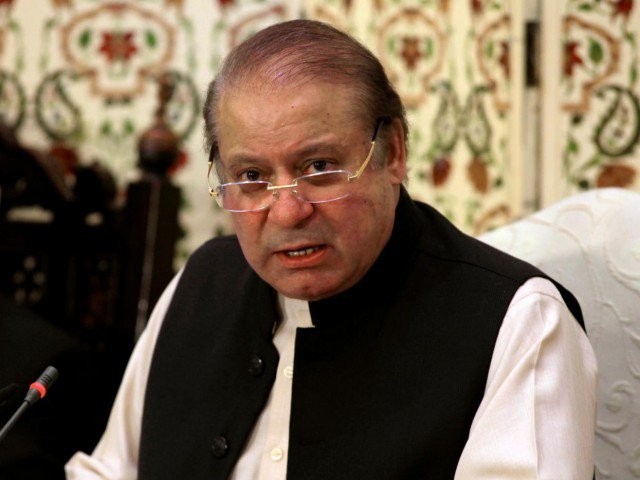 The investigation officer said the call-up notices were issued on Aug 11, 2017 to the accused – Sharif and his sons, Hussain and Hassan – but they showed their inability owing to review petitions filed before the Supreme Court. PHOTO:FILE

ISLAMABAD: The prisoner seemed to have lost a little weight. He looked a bit pale and closed his eyes for a few seconds every now and then as if meditating. He stayed in the courtroom for over two-and-a-half hours and spoke with his brother and others in whispers.

Clad in a cream-coloured Shalwar Qameez with ‘MNS’ printed on his left cuff, the prisoner was none other than the three-time former prime minister Nawaz Sharif.

Sharif was presented on Wednesday before an accountability court for facing two pending references – Al-Azizia & Hill Metal and Flagship & other companies – of the National Accountability Bureau (NAB) in media’s presence for the first time since July 13 when he was sent to Adiala Jail.

‘Caged lion of Punjab’: the fall of Pakistan’s ex-PM Sharif

Earlier on July 6 an accountability court convicted and sentenced the former premier, his daughter Maryam and son-in-law Captain (retd) Safdar to respectively 10-year, seven-year and two-year imprisonment, after finding them ‘guilty’ in NAB’s Avenfield Apartments reference.

“I am feeling good now,” the former PM replied to a reporter’s question about his health as he was being taken back to jail from courtroom after the hearing.

“Do you have permission to pray in mosque in jail,” the reporter asked. “I offer my prayers in the cell,” Sharif replied. Asked whether he was in solitary confinement, Sharif said he was being kept in a cell.

“You can call that whatever you want to,” he said. “How often do you get to meet Maryam,” the reporter enquired. “We meet once in a week on the visitors’ day,” he replied.

The joint investigation team (JIT) head Wajid Zia, also appeared before the court but he was relieved because the defence counsel, Khawaja Haris, was busy at the Islamabad High Court (IHC) and conveyed through his associate that he was not available to cross examine the witness on Wednesday.

In view of Haris’s engagement at the IHC with regard to Shairfs’ petitions seeking suspension of their sentences, the court directed the investigation officer, Zia, and Sharif to appear before court on Aug 20.

As the court took a break at 12:35 pm for half-an-hour, the judge enquired Sharif if he wanted to go. “As you wish,” Sharif replied. He stayed in the courtroom for another 30 minutes till the court finally adjourned the case till Monday.

Before the court took up the reference for hearing, the Pakistan Muslim League-Nawaz (PML-N) President Shehbaz Sharif and another PML-N leader Khawaja Asif made their first entry in the accountability court in the last 11 months.

Shehbaz reached the courtroom at 9:15am and decided to leave after staying for an hour but when a journalist told him that his brother was on his way to the court and would reach in 10 minutes, he and Asif stayed on.

In the courtroom, both the brothers continued to whisper into each other’s ears for 16 minutes and then Shehbaz and Asif left the courtroom. They were replaced by Pervaiz Rashid and Pir Sabir Shah.

Asif Kirmani, Mushahidullah, Chaudhry Tanvir, Danyal Chaudhry and several others were present in the courtroom while many others were outside the Federal Judicial Complex, where the courts are located, because they were not allowed to go inside.

In his statement, Mehboob Alam said pursuant to the Supreme Court’s July 28, 2017 order in Panama case, he collected and examined the relevant court orders, the JIT’s investigation report, CMAs filed before the Supreme Court and submitted the record before NAB’s department concerned, which led to filing of reference and, later, he started recording statements of the witnesses.

The investigation officer said the call-up notices were issued on Aug 11, 2017 to the accused – Sharif and his sons, Hussain and Hassan – but they showed their inability owing to review petitions filed before the Supreme Court.

In his statement, Alam while relying on an audit report told the court that Sharif allegedly got roughly 80 per cent of the profit generated from Hill Metal. While giving details of several transactions, he said, €1.2million and US$10.2million were transferred in Sharif’s Standard Chartered bank account.

Then, he said, Rs1.187billion were transferred in Sharif’s account. An amount of Rs59.256 was later transferred in Maryam’s account, he added, and Hussain gave £1.5m to his brother Hassan.

Accountability Court Judge Arshad Malik reminded the officer that he should only exhibit the documents that are related to the accused, addressed to him or sent by him or the ones that bear his signatures.

He said accused persons failed to reasonably account for acquisition of the assets and reference was filed for commission of corruption and corrupt practices. Following his statement, the court adjourned the hearing till Aug 20.