Contin­gent compet­ing at their own expens­e since sports federa­tion is not affili­ated with PSB
By Natasha Raheel
Published: August 15, 2018
Tweet Email 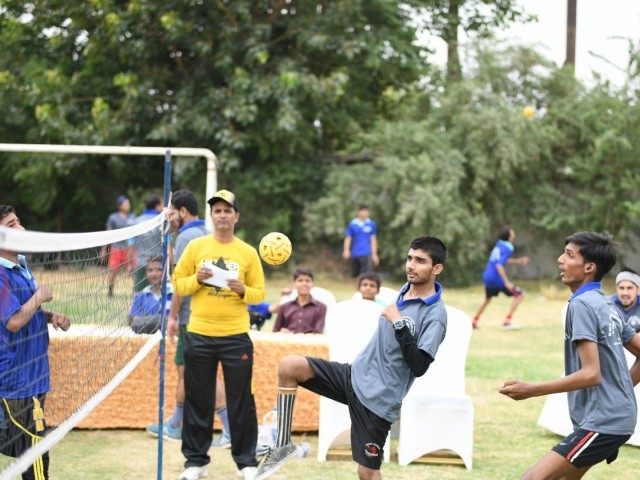 KARACHI  : Pakistan’s athletes are eager to make history but limitations from the government are making things challenging even before their Asian Games adventure begins in Palembang, Indonesia.

Pakistan will be making their debut at the sepak takraw event in the Asian Games, with the six-player squad among the 15 nations competing for gold at the event.

Pakistan are competing in only the men’s competition and the squad is self-financing their participation at the Games since the Pakistan Sepak takraw Federation is not affiliated with the Pakistan Sports Board (PSB).

However, team coach Dr Muhammad Arif Hafeez — who is also the president of the Sindh Sepak takraw Association — said he is trying to get help from the PSB but so far there has not been much to add.

“We are going to the Asian Games on August 23,” Hafeez told The Express Tribune. “We have been preparing for the event and we were hoping that the government would help, but they didn’t . However, our athletes are still representing Pakistan. We are all trying to meet expenses for the participation on our own, and that is a huge challenge that we have to overcome even before going to the Games. Everything is expensive, from flight tickets to accommodation. It is all becoming harder but we are trying.”

Hafeez said that the team is well-prepared and is optimistic about their chances of claiming a medal. “We can expect a bronze medal from the Games,” he said. “It is our first time to even be playing at the Asian Games, and the competition is incredibly tough since sepak takraw is a Southeast Asian sport. It is challenging on every level and, with top teams like Thailand, Malaysia and China playing, it will not be easy. India are a better team than ours too and we have Iran as well.”

The coach further highlighted the difficult nature of the tournament, labelling it even more competitive than the World Cup. “I can safely say that Asian Games’ sepak takraw event is tougher than the World Championship since here you don’t face any easy opponents.”

Sepak takraw is a traditional sport of the nations in Southeast Asia. Each team has three players competing on 13.4 x 6.1 meters field and separated by a net which has height of 152 cm (men) or 142 cm (women). Sepak takraw first featured in the Asian Games in Beijing 1990 and has been a regular feature ever since.

The Pakistan team includes captain ShabbirAhmed, Hameed Shahid, Hussain Ahmed Khan, Sarfaraz Ahmed, Sheraz Asif and Abdul Basit, with Hafeez being the coach and Arif Waheed Khan serving as the manager of the side. Hafeez added that the game has gained a good following in Pakistan over the years but the exposure at the Asian Games will further help promote the sport.

“People will get to know that we also exist and that this game is also played,” said Hafeez. “It is a new sport but in Pakistan we have players coming to training camps and they are showing interest in it. All of our players in the squad too have never played another sport before and they picked sepak takraw as their primary sport, and that is a good trend.”

The team will leave on August 23 for Indonesia and has been training in Karachi for two months to prepare for the Games.

Celebrating independence on the green