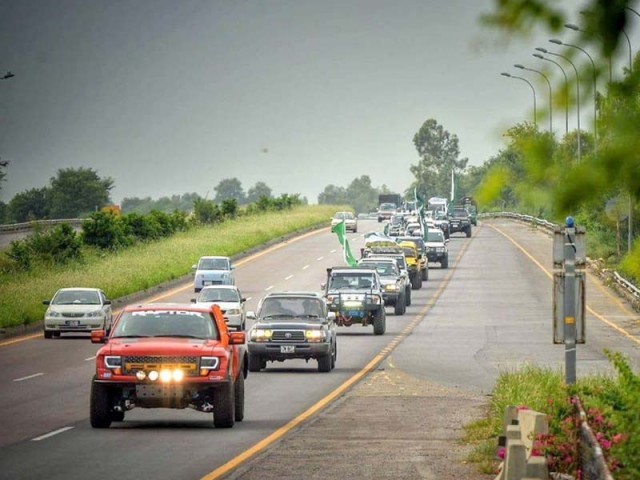 Jeep rally organised by PTI on the occasion of Independence Day. PHOTO: ONLINE

To mark independence day, a jeep rally from the provincial capital and through the picturesque Hazara division of the province concluded on Tuesday.

The rally, which included a caravan of 52 jeeps and 20 mountain motorbikes, had started off from Peshawar on Monday, reaching Mansehra late on Monday evening.

On Tuesday morning, Independence Day, the convoy set off for their final destination in Haripur.

Decked in the national flag, they drove through the mountainous valley all the way to Haripur on Tuesday where the rally concluded with a large fireworks display.

Earlier on Tuesday, the Mansehra Deputy Commissioner Zubair Khan saw off the rally, which had been jointly organised by the Frontier 4×4 Club, the Tourism Corporation Khyber-Pakhtunkhwa (TCKP) and the Hazara Division commissioner.

Upon reaching Abbottabad, the participants of vehicular march were accorded a warm welcome by the people.

Youngsters dressed in the national colours of green and white danced to the beat of drums, while local singers and artistes sang the national anthem and national songs on the occasion.

Commendation certificates were also distributed amongst participants of the rally.

The speakers said that the rally would send a positive message and present a soft image to the world about restoration of peace and natural beauty of the country.

They said the event would attract more foreign and domestic tourists to visit Khyber Pakhtunkhwa to enjoy the natural beauty.

After a short stay in Abbottabad, the jeeps and bikes part of the rally then proceeded towards Haripur.

Upon reaching Haripur, a large number of people welcomed the participants with rose petals and garlands.

Later, a concluding ceremony was held in which huge fireworks was carried out at evening.