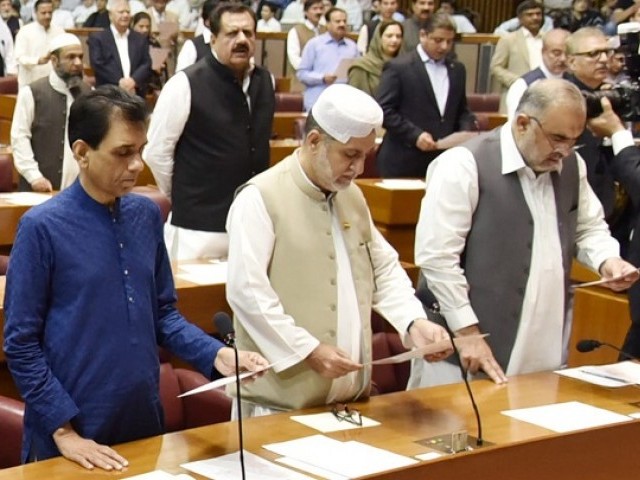 The newly elected members of the national and provincial assemblies took oath on Monday, setting the stage for the country’s second democratic transition of power.

Following the oath-taking ceremonies in the National Assembly and provincial assemblies of Khyber Pakhtunkhwa, Balochistan and Sindh, Twitter reacted to Pakistan’s continued progress down the path of democracy.

The dream Khan sb saw 22 years ago, is about to become a reality, Alhamdulillah. Countless obstacles came in his way but nothing could deter him from his pursuit for Naya Pakistan. He strongly held onto his faith & finally made the destination. A true inspiration for all of us

Best of luck to all the parliamentarians who are in the national assembly. May you fulfill your oaths & help Pakistan be a better place. May you have the sense & the conscience to serve your country above personal agendas, hatred and bigotry. #nationalassembly

Missing our mother Shaheed Benazir Bhutto on this historic day. So much bittersweet joy 2 witness my brother @bbhuttozardari enter Parliament& take his 1st oath & could not be prouder of my father 4 his return 2 Parliament #BhuttoAndZardariTakeOver #JiyeBhutto #AgliBariPirZardari pic.twitter.com/ae84FghxiJ

However, some twitter followers weren’t so kind to the newly elected MNAs and MPAs.

People taking oath in #Parliament today should paste this script on the wall of their room. They must read this oath every night before sleeping & after waking up.#NationalAssembly

Marvi Sirmed pointed out a ‘Freudian slip’ by Sheikh Rasheed.

What a Freudian slip!

Ask Asad: How do I overcome the constant sullenness of everyday life?