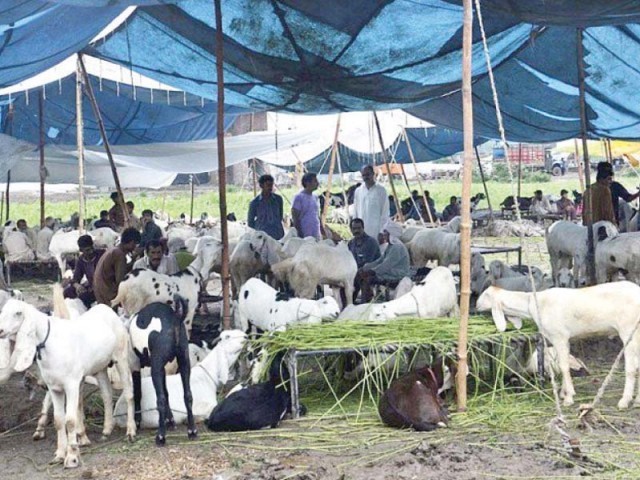 LAHORE: With Eidul Azha just a few days away, buying and selling of sacrificial animals is gaining momentum in the provincial capital.

Several cattle markets have popped up around the city, where citizens are eagerly purchasing animals. On an average, approximately 0.4 million animals are slaughtered in the city every year at Eidul Azha. Out of these, around 0.25 million are smaller creatures such as goats and sheep, while the remaining 0.15 million are cows, calves and camels, stated an official from the city government.’

However, majority of the sellers are demanding absurdly exorbitant rates since the city government has not introduced a price regulatory mechanism. A survey of several sacrificial animal markets revealed that goats cost Rs30,000 to Rs60,000, sheep and lambs cost about Rs25,000 to Rs55,000 and cows cost about Rs55,000 to Rs1.2 million.

Yasir Mehmood, a resident of Shadman, maintained that the prices of sacrificial animals have been increased. He demanded the government chalk out a strategy to control these outrageous prices so that blue collar citizens are able to purchase animals and fulfil their religious obligation.

Yet many citizens remain hopeful that the prices of sacrificial animals will be reduced in the next few days as sellers will want to dispose of all of their creatures. Ashraf Ali said that the sellers were asking for a lot of money, especially for goats. Eventually they will have to reduce these rates if they want to sell all their animals, he added.

Making a living: Vendors decry lack of facilities at Sector I-12 cattle market

Many of the citizens demanded the government enforce a price regulatory mechanism so that the people are able to purchase sacrificial animals on reasonable rates.

On the other hand, sellers maintained that the significant cost of fodder, including the price of transporting the animals, is the main reason behind the high prices.