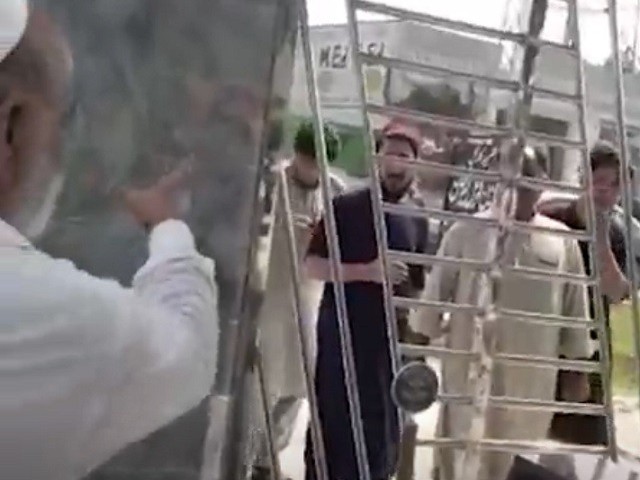 Martyr’s brother refuses to let PTM leader into the Mazar for his speeches against state institutions. SCREENGRAB

Captain Karnal Sher Khan was martyred while fighting the Indians in the Kargil sector of disputed Kashmir region in 1999. He was awarded the highest military honour, Nishan-e-Haider, for his bravery during the Kargil war.

Manzoor Pashteen, who is in Swabi for the upcoming public meeting of the PTM, visited the mausoleum of Captain Karnal Sher Khan along with his colleagues. However, Karnal Sher Khan’s elder brother Anwar Sher Khan locked the main gate and refused to let Pashteen in.

“I know you. I have visited your place [Waziristan]. You haven’t come here to salute [or pay tribute] to Karnal Sher’s grave,” Anwar Sher Khan could be heard saying in a video which has gone viral on the social media.

“I have seen many videos on Facebook [social media websites]. Enough [is enough],” Anwar tells Pashteen while referring to his speeches against the state institutions, particularly the army.

Anwar denied Pashteen entry into the mausoleum “out of respect for the armed forces of Pakistan and the national flag”.

“I have seen videos where the national flag is being desecrated [at PTM events], and the armed forces are being discredited and badmouthed,” Anwar told The Express Tribune. “I still have the uniform of my martyred brother. Anyone in this uniform must be given due respect.”

Anwar said his brother had hoisted the national flag 18,400 feet above sea level at Kargil and earned Nishan-e-Haider and respect of the nation. “I will never tolerate anyone discrediting the national flag and the armed forces,” added.

Anwar was referring to an incident in April when a young man was stopped from waving Pakistan’s national flag at a public meeting of the PTM in Swat, though Pashteen later clarified that it was a misunderstanding.

The organiser of PTM’s rally in Swabi, Liaquat Yousafzai said Saturday’s incident was one of the attempts being made by “some elements” for the past few days to destabilise the situation.

Speaking to The Express Tribune, Yousafzai claimed that Anwar was suffering from mental illnesses. He even called him a drug addict.