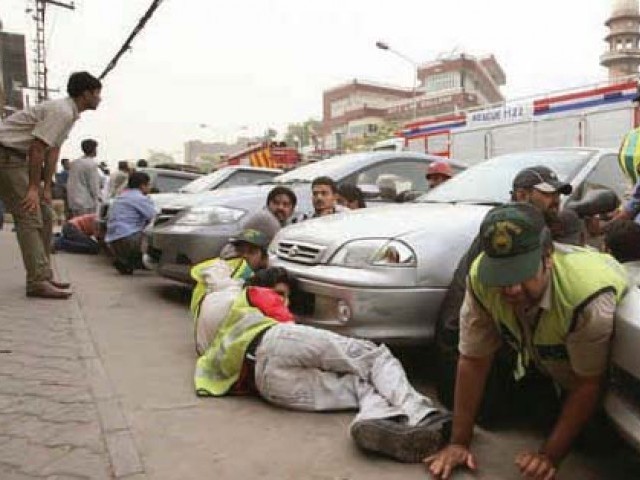 Local residents and rescue workers take cover during an attack on an Ahmadi worship centre in Lahore’s Garhi Shahu neighborhood on May 28, 2010. PHOTO: FILE

Ahmadis across the country remember the horror that struck Lahore a year ago on May 28th, 2010. At least 88 Ahmadis died that day in coordinated gun and bomb attacks on two places of worship used by the community in Lahore. Ahmadis are, of course, not permitted under special laws directed towards them, to call these places ‘mosques’. We wonder how many other citizens remain concerned about the terrible events that took place that day or the fact that even now no justice has been obtained for those killed by the unknown attackers. There seems to have been no determined effort on the part of authorities in Punjab to track down those responsible or to ensure that such an incident never takes place again.

In the current environment, it is more than likely that this will happen. Ahmadis in our society have been pushed to the very sidelines, and little has been done to protect them from ferocious clerics who dub them as infidels or worse on the basis of their beliefs. As a result of this the four million or so Ahmadis in the country continue to feel threatened and insecure. Dozens are killed each year in attacks based on belief. In 2010, this number stood at 99. They are also persecuted by other means. For instance, discrimination against Ahmadis in matters of employment or even admission to schools is no longer uncommon. In some communities, they have been declared outcasts, banished from marriage functions or other events.

There is only one way to change this. In the first place an example must be set by drawing the Ahmadis back into the mainstream of the population. This can best be done by removing from the statute books the specific laws that give them a diminished status. As part of the same process, it is also vital that those behind the attacks in Lahore be tracked down and brought to book. This is the only way to ensure that an example is set which prevents others from adopting a similar course of action and offers a community that has remained under siege almost since the creation of Pakistan some measure of safety.