Protes­t call given by severa­l partie­s but only leader­s of ANP and JUI-F show up
By Our Correspondent / Photo: Athar Khan
Published: August 10, 2018
Tweet Email 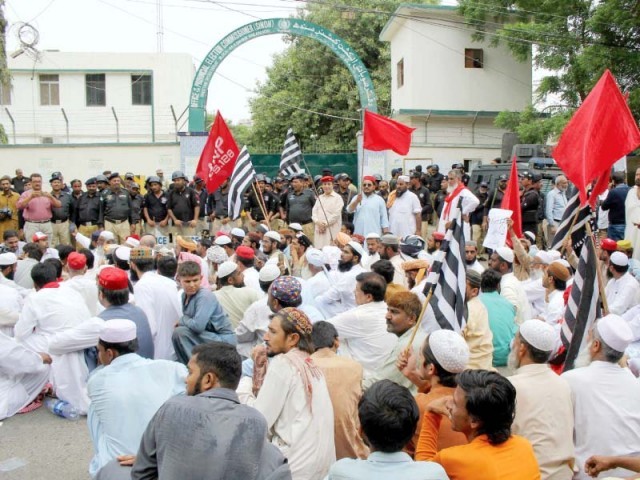 KARACHI: Workers and supporters of various political parties staged a sit-in in front of the office of the provincial election commission to protest what they termed as massive rigging in the general elections.

The protest call was given by the all-parties action committee, comprising leaders of several political parties including Pakistan Muslim League-Nawaz (PML-N), Pakistan Peoples Party (PPP), Muttahida Majlis-e-Amal (MMA), Awami National Party (ANP) and others. However, the leaders of only the ANP and the Jamiat Ulema-e-Islam-Fazl (JUI-F) showed up for the protest outside the ECP’s office.

Opposition parties end protest against ‘rigging’ outside ECP in Islamabad

The protest, which lasted for a few hours, caused a severe traffic jam in Saddar and its adjoining areas. JUI-F leader Rashid Soomro, who contested the polls against PPP chairperson Bilawal Bhutto Zardari in Larkana, called the election a “drama”, adding that “pre-planned results have been announced in the election to appease candidates of particular parties.”

The protesters, holding banners and placards, demanded the resignation of the Chief Election Commissioner and said they would continue to protest until action was taken against the relevant authorities and reelections were held in the province.

“Pakistan’s Independence Day is approaching fast and we will celebrate August 14 as the day of our struggle for free and fair election,” said Soomro.

During the protest, the protesters also shouted slogans against the Pakistan Tehreek-e-Insaf and its leader Imran Khan calling him an agent of international forces.  “Imran Khan is a representative of America and the Jewish lobby,” said Soomro.

ANP secretary general Younus Buneri, while addressing the protesters, said the mandate of all political parties had been snatched to impose Imran Khan as the prime minister of Pakistan.  He warned that the ANP, with other political forces, would paralyse Karachi as well as other cities and towns in Pakistan, if the votes weren’t recounted and by-elections weren’t held in controversial constituencies. “We will not accept the results of the rigged election come what may,” he said.