Skin bleaching in Africa: An 'addiction' with risks

Skin bleaching in Africa: An 'addiction' with risks 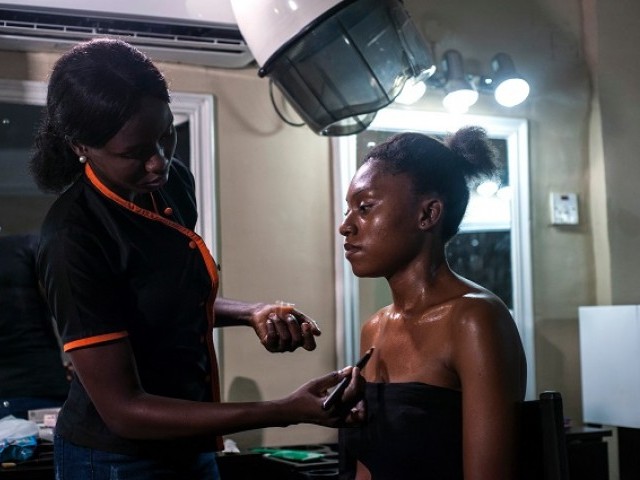 A beautician applies a skin toning treatment on a woman at a beauty salon in Lagos on July 13, 2018. PHOTO: AFP

LAGOS: Dr Isima Sobande was in medical school when she first heard of mothers who bleached the skin of their babies.

She dismissed it as an urban myth. But it wasn’t long before she saw it with her own eyes.

At a health centre in Lagos, a mother brought in a two-month-old infant who was crying in pain.

“He had very large boils all over his body,” the soft-spoken 27-year-old Nigerian said. “It seemed like they weren’t normal.” 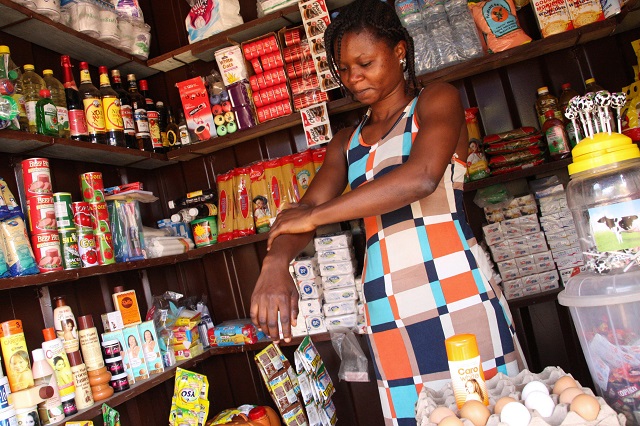 A woman applies a cream called Caro White Lightening Beauty Cream at her shop in Lome on June 27, 2018. PHOTO: AFP

The baby’s mother explained that she had mixed a steroid cream with shea butter and slathered his skin with it in order to make it whiter.

Indonesia’s tattoo removers zap the sin from your skin

“I was very appalled. It was distressing,” said Sobande.

For many Nigerians, it is a “standard procedure,” a gateway to beauty and success, she said.

“It’s a mindset that has eaten into society. For a lot of people, it’s the path to getting a good job, having a relationship.” 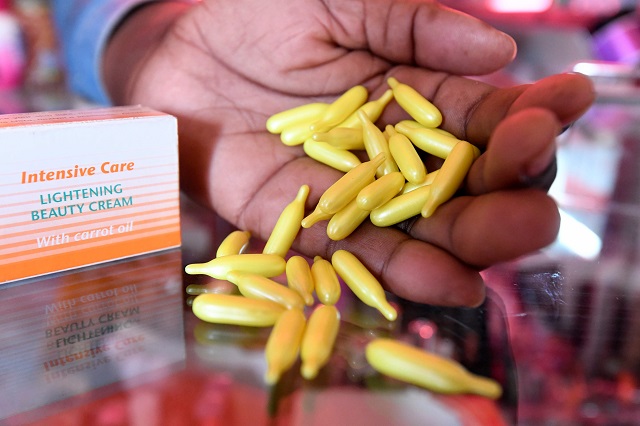 A beautician displays capsules and cream used for skin lightening at a beauty shop in Nairobi on July 6, 2018. PHOTO: AFP

Skin lightening is popular in many parts of the world, including South Asia and the Middle East.

But medical experts say that in Africa a continent where regulations are often lax or scorned the widening phenomenon is laden with health risks.

Cultural watchdogs, for their part, see it as the toxic legacy of colonialism.

Africa is experiencing a “massive trend of increased use (of skin bleaching), particularly in teenagers and young adults,” said Lester Davids, a physiology professor at the University of Pretoria in South Africa.

“The older generation used creams the new generation uses pills and injectables. The horror is that we do not know what these things do in high concentrations over time in the body.”

Where statistics about Africa’s skin-bleaching industry exist, they are often old or unreliable. 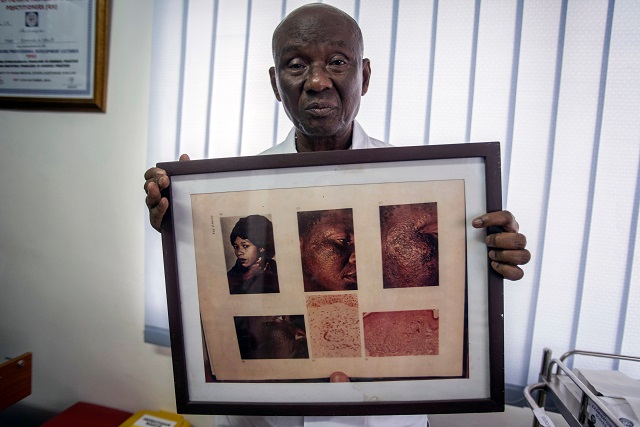 Edmund Delle, dermatologist and founder of Rabito Clinic, at his clinic in Accra on July 2, 2018. PHOTO: AFP

But evidence from the range of products, suppliers and services points to a continent-wide market that may number tens of millions of people and possibly more.

In Nigeria alone, 77 per cent of women by extrapolation, more than 60 million people are using lightening products on a “regular basis”, the World Health Organisation (WHO) said in 2011.

Experts say the African market is rapidly expanding as companies seek to cash in on the continent’s booming youth population.

The rich tend to opt for pricier registered products which are available in standard doses.

Others are likely to buy creams, often bootleg concoctions mixed in the back streets, that may be dangerous and are blatantly sold in defiance of official bans or constraints. 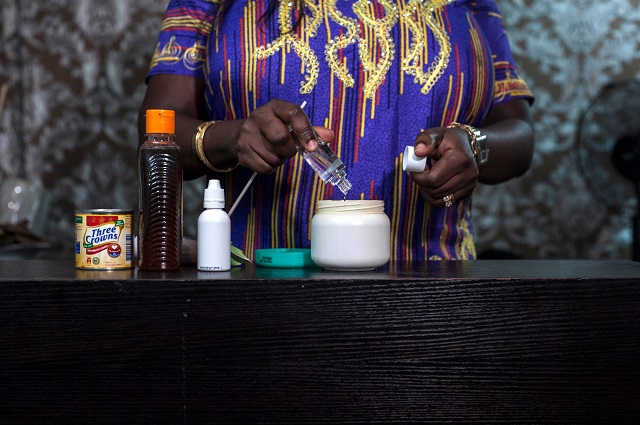 Ingredients may include hydroquinone, steroids, mercury and lead the same element that, at high doses, poisoned Elizabethan courtiers who powdered their faces ivory white.

In spite of the risks, authorities are struggling to control the bleaching innovations, which include a compound called glutathione, taken as injections or pills.

Nigeria, South Africa and Kenya have all banned skin bleaching products with high amounts of hydroquinone and mercury, with the province of KwaZulu-Natal in South Africa urging people to “reject all colonial notions of beauty”.

In July, Ghana’s Food and Drugs Authority issued a statement telling pregnant women not to take glutathione pills to bleach their unborn babies saying that there may be “serious toxic side effects” such as “asthma, renal failure and chest pains.” 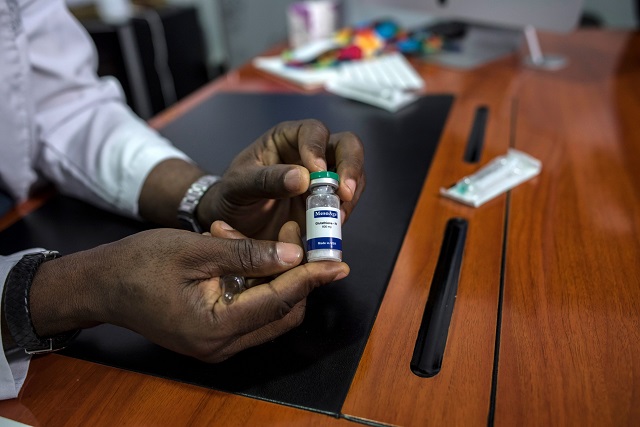 An ampule of glutathione used for skin lightening is seen on July 17, 2018. PHOTO: AFP

The US Food and Drug Administration (FDA) stresses that it has not given approval for any of the injections on the market today.

“These products are potentially unsafe and ineffective, and might contain unknown harmful ingredients or contaminants.”

Those who start using skin lightening say they invariably stay with the practice.

“Before you know it, it has become some sort of an addiction where you want to maintain that look,” said Dabota Lawson, a Lagos socialite and cosmetics entrepreneur.

His “Cleopatra Royal” cream, whose label features Elizabeth Taylor in her famous role as the Egyptian queen, promises to “lighten and radiate”.

Customers should start seeing results in two weeks, says Okiemute, explaining that his creams, which include collagen, kojic acid and “anti-ageing” snail slime are safe, though he declined to divulge his formula.

“We have a lot of customers who have used a lot of wrong products, they come to us and we give solutions,” he says.

He flicked through his phone to show before-and-after photos of a client who had a problem with dark knuckles, a telltale sign of a skin bleacher.

Intravenous injections and pills of glutathione an antioxidant naturally found in the body that has a lightening side effect are the new frontiers of skin bleaching.

At his clinic on the outskirts of Lagos, beside an abandoned Chinese restaurant, plastic surgeon Aranmolate Ayobami charges clients 150,000 naira ($415, 350 euros) for a five-week course of glutathione injections.

Known as the “Buttmaster” for helping patients seeking an hourglass figure, Ayobami buys the injections from companies he trusts in the United Arab Emirates or the United States.

He only gives certain dosages for a limited amount of time, he said.

But sometimes clients will bring in their own cheaper product that they bought online and urge him to inject them. “We try to discourage that,” he said.

If many millions of Africans lighten their skin without regret, others are dismayed.

“Skin bleaching is one manifestation of folks trying to get power and privilege aligned with whiteness,” said Yaba Blay, a researcher at North Carolina Central University.

“We’re seeing folks attempt to be perceived as having more value because of their complexion.”

Recent black movements are trying to challenge that perception.

#Melaninpoppin, a hashtag celebrating black skin, and the smash-hit movie “Black Panther,” which featured an almost all-black cast wearing African-inspired outfits and natural hair, are held up as testaments to a shift away from longstanding Eurocentric standards of beauty.

But whether the tide of opinion is turning in Africa itself is another question.

Those who endorse fairness creams should be ashamed of themselves: Nawazuddin Siddiqui

“The truth for me was that my beauty was more accepted abroad than at home,” said Ajuma Nasenyana, a model from northern Kenya, who has walked for Victoria’s Secret and Vivienne Westwood.

“In the African industry the lighter your skin tone the more beautiful you are. Hopefully the industry is changing and starting to appreciate darker skin.”

Sobande, the doctor, said, “We’re living in a more positive environment than a few years before.

“But it’s going to take a lot of effort to change the mindset.”