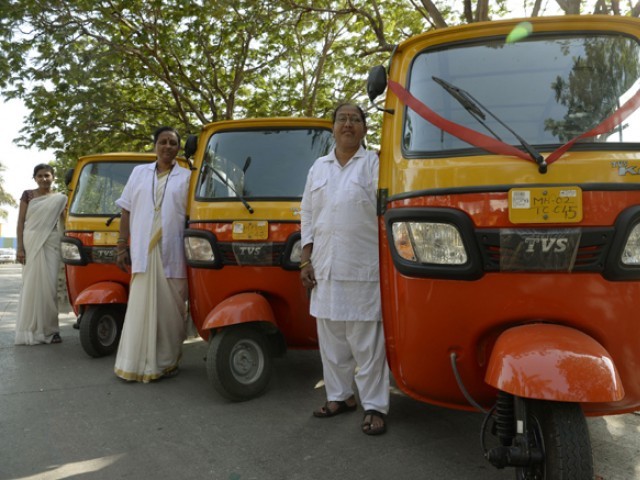 This photo taken on March 20, 2017 shows female Indian rickshaw drivers posing for a picture ahead of their vehicle registration process in Mumbai. They are one of Mumbai's first female auto drivers to make use of a government scheme aimed at empowering women. PHOTO: AFP

ISLAMABAD: Transport companies operating in Rawalpindi have started hiring women as rickshaw drivers which is attracting a number of unemployed women.

The company representatives said that the trend of women as rickshaw driver is not very attractive as yet but in future, they hope, this profession might gain popularity as it will help women financially.

“I am the sole earner in my family, so I decided to get a rickshaw with the help of relatives, initially it was really strange but after wards people start encouraging me,” said rickshaw driver Noreen Bano.

Initially she used to pick and drop to the schoolchildren then she became associated with a private cab service company, where she earned enough money to raise her children.

She expressed her belief that even if you are not educated you just need passion and confidence to get into this profession, adding that it is better than begging on streets to earn  and raise one’s family.

“A lot of women asked me to teach them how to drive a rickshaw, but I say I will only do so if they take it seriously and do not give up, because in this profession you need courage and confidence,” she further stated. “Everyone respects me,” she said, “neither male nor female passengers caused her any hassle.” If you are scared, the fear will lead you nowhere, you will not be able to do anything.” She expressed that she believes women are capable of achieving everything.