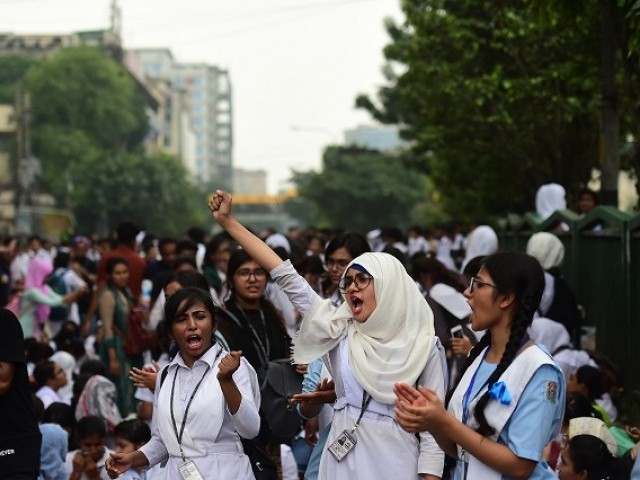 DHAKA: More than 100 people were injured in Bangladesh on Saturday after police fired rubber bullets at students protesters, a doctor and witnesses said, a major escalation in a stand-off between the government and demonstrators.

For the last week students have brought parts of the capital Dhaka to a standstill with a protest against poor road safety after two teenagers were killed by a speeding bus. 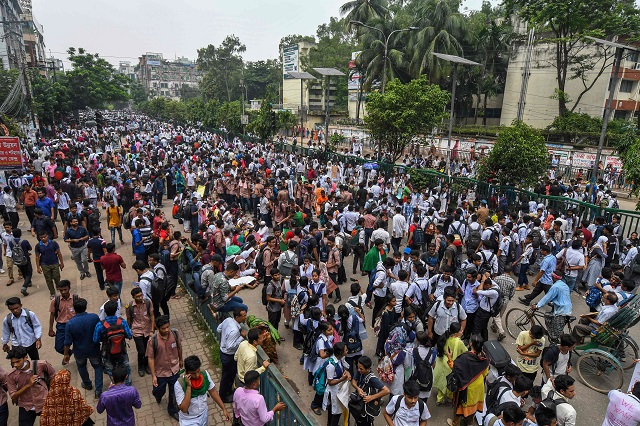 Bangladeshi students block a road during a student protest in Dhaka on August 4, 2018. PHOTO: AFP

Bangladesh’s transport sector is widely seen as corrupt, unregulated and dangerous, and as news of the teenagers’ deaths spread rapidly on social media they became a catalyst for an outpouring of anger against the government.

On Saturday the protests took a violent turn in Dhaka’s Jigatala neighborhood.

Witnesses said police fired rubber bullets and tear gas at demonstrators and that alleged pro-government activists attacked youngsters, including some of those rushing to nearby hospitals for treatment. 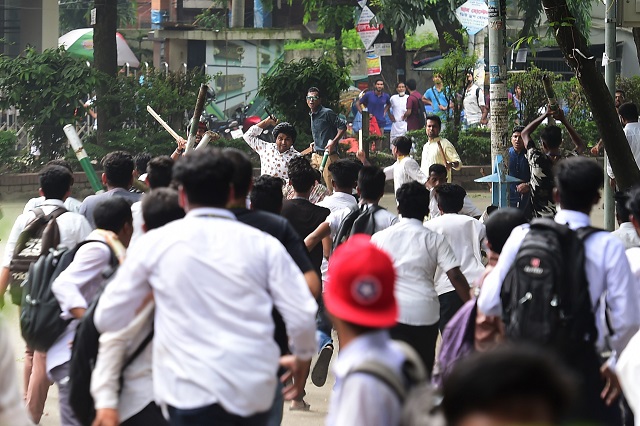 Bangladeshi students clash with an unidentified man during a student protest in Dhaka on August 4, 2018. PHOTO: AFP

Police denied they fired rubber bullets or tear gas at the protesters.

However hospital staff said dozens of people had been injured, some seriously. 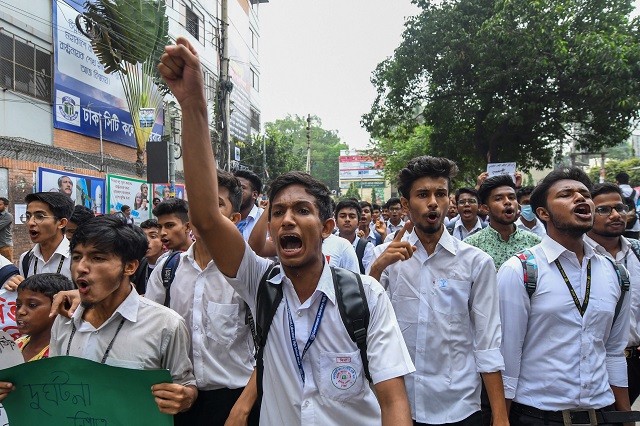 Bangladeshi students march along a a street during a student protest in Dhaka on August 4, 2018. PHOTO: AFP

“We have treated more than 115 injured students so far since the afternoon,” emergency ward doctor Abdus Shabbir said, adding some sported injuries consistent with rubber bullets.

“A few of them were in very bad condition,” he added.

A protester said students were holding protests peacefully on the road when they were attacked.

“We all are feeling threatened here. We wanted a peaceful protest. We don’t want any trouble occurring around here. Yet rubber bullets were shot at our brothers,” Sabbir Hossain, a student, said.

He said the party office which was close to Jigatala was vandalised by some unidentified youths, dressed in school uniforms, moments before the clashes erupted.

An AFP photographer at the scene of one the clashes saw students and unidentified young adult men fighting with sticks and rocks, leaving several wounded. 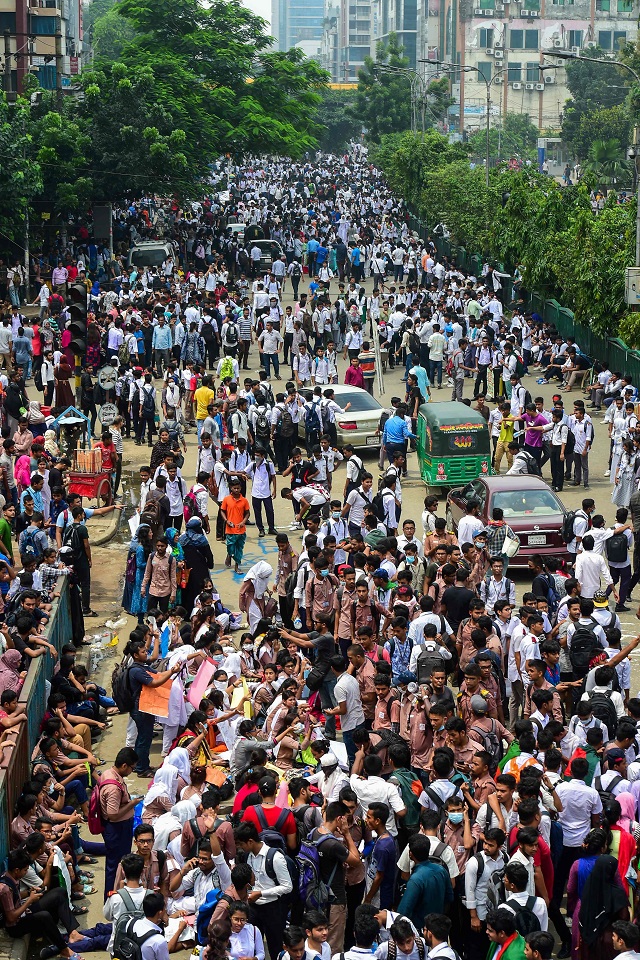 Bangladeshi students block a road during a student protest in Dhaka on August 4, 2018. PHOTO: AFP

The government of Prime Minister Sheikh Hasina has ruled Bangladesh since 2009, but in recent months it has been shaken by mass protests demanding an end to a decades-old system of discriminatory civil service recruitment.

Several powerful ministers have pleaded with students to return to their classes, amid worries the unprecedented teen outrage could turn into widespread anti-government protests ahead of general elections due later this year.

But their pleas have had little effect.

Earlier on Saturday thousands of students wearing school uniforms defied rain to block major intersections in the capital for the seventh consecutive day. 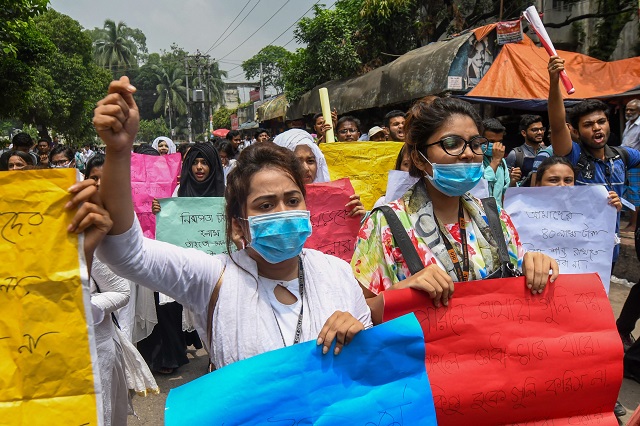 Bangladeshi students march along a street during a student protest in Dhaka on August 4, 2018. PHOTO: AFP

Teens as young as 13 were seen on Dhaka’s notoriously clogged roadways checking whether cars and buses had valid licenses and were in a roadworthy condition.

“We won’t leave the roads until our demands are met. We want safe roads and safe drivers,” said protester Al Miran.

An insensitive comment by Shajahan Khan, a government minister with ties to powerful transport unions, only poured oil onto the fire earlier in the week.

Khan questioned why there was such an uproar over the two Dhaka children but no reaction when 33 people were killed in an Indian bus crash the day before.

There have been widespread social media demands for the minister’s resignation despite his subsequent apology.

The education ministry shut down high schools on Thursday in an effort to quell unrest, promising students their demands for road safety reforms would be considered.

Dhaka suffers from daily gridlock but congestion has been exacerbated by blockades set up across the city since Sunday.

The embassies of the US and Australia warned of significant delays and disruptions as a result of the protests across Dhaka and elsewhere in the country.