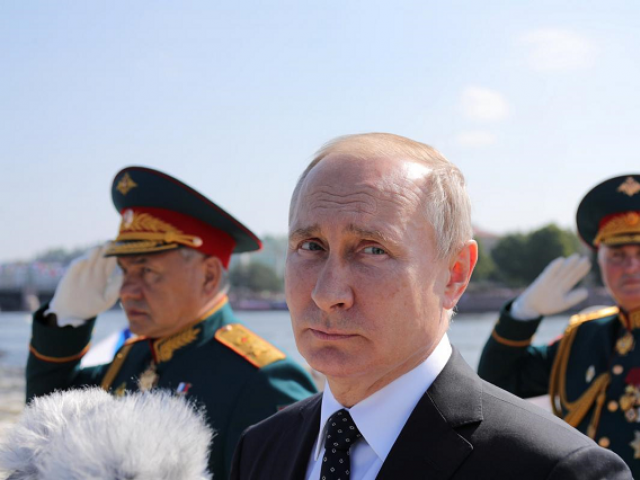 After Russia’s 2014 annexation of Ukraine’s Crimea, seen by the Kremlin as a big success, the military has grown increasingly influential in domestic and foreign policy, especially in Syria. PHOTO:REUTERS

MOSCOW: Vladimir Putin has created a new directorate inside the Russian army to promote patriotism, evoking memories of a Soviet practice that once saw soldiers taught the precepts of Marxism and Leninism by political commissars.

The move, approved by Putin in a presidential decree published on Monday, will affect Russia’s around 1 million active military service people and appears designed to ensure soldiers’ loyalty at a time when Moscow is locked in a geopolitical standoff with the West.

“In conditions of a global information and psychological confrontation (with the West) the role of political and moral unity within the army and society drastically grows,” Alexander Kanshin, who sits on a civilian body that shapes military policy, told Interfax news agency in February.

In the Soviet Union, a similar directorate worked to ensure that the army stayed loyal to the then ruling Communist party.

Putin, commander-in-chief of Russia’s armed forces, ran as an independent candidate when re-elected to a new term in March, but is supported by the ruling United Russia Party

His decree said the new directorate would be responsible for “military-patriotic” work and, in a separate decree, Putin made Colonel-General Andrei Kartapolov, a veteran of Russia’s conflict in Syria, its new head and a deputy defense minister.

Vladimir Putin sworn in as president for fourth term

The defense ministry did not release details of the new directorate, but an unnamed military source told the Kommersant daily that Kartapolov would also be responsible for the activities of the Yunarmiya, a patriotic military youth organization sponsored by the ministry.

After Russia’s 2014 annexation of Ukraine’s Crimea, seen by the Kremlin as a big success, the military has grown increasingly influential in domestic and foreign policy, especially in Syria.

The Bolsheviks, wary of the army’s loyalty, introduced political commissars in 1918. In the late Soviet period, political officers, known as zampolity, tried to ensure soldiers knew their communist doctrine and where their loyalties lay.

Vladimir Scherbakov, a military specialist at the Nezavisimaya Gazeta daily, said Putin’s decision to resurrect a version of the Soviet-era directorate raised questions.

Others wondered whether the creation of the new directorate was the start of a wider renaissance in ideological education that would draw in schools and colleges, and whether the new instrument would be used to root out young soldiers deemed as too pro-Western.

“All of this is reminiscent of a gradual return to the USSR,” wrote Dmitry Drize, Kommersant’s deputy editor

Should the next UN rights chief treat leaders more gently?