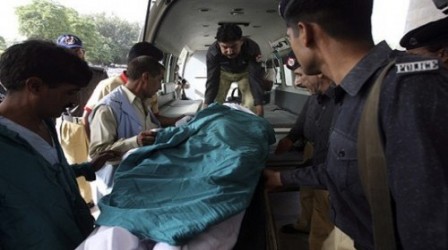 Eyewitnesses described the terrorist as fair-complexioned and between the ages of 20 and 22. They are said to have entered the hospital premises camouflaged as police and eyewitnesses said they were riding a vehicle with an official number plate. Some police officials say the objective of the attack seems to have been either killing or securing the release of one of the terrorists responsible for Friday’s attack on the Ahmadi ibadatgah in Model Town, Muaz, who had been captured the same day and was under treatment at Jinnah hospital.

Responding to the hospital’s SOS, the police moved in soon after to cordon off the area and secure the hospital. For at least 30 minutes, the two sides traded fire. One of the terrorists is also said to have been shot in the leg.

One of the terrorists is said to have made his way to the rooftop of the hospital and from this vantage point, continued providing covering fire and picking out the policemen assembled in the hospital premises. Shortly after, the police brought in Armoured Personnel Carriers and Elite Forces reinforcements and managed to cordon off the area.

In order to prevent the terrorists from identifying the location of Muaz in the ICU,  police say, they disconnected power supply to the hospital. Panicked by the firing and the dark, patients, their attendants and the hospital staff made for the exits, running for their lives.

In the ensuing melee, police sources say, the four terrorists made good their escape from the rear entrance of the hospital. As the police gave chase, there was a brief encounter between the two sides in the adjoining area of Hanjarwal, before the terrorists fled from there as well.

Initially, eyewitnesses said the terrorists used a police vehicle for their getaway but later, the police contradicted this claim. It is now being thought that since the car the attackers came in had a government number plate, that’s why the eyewitnesses were deceived. From the rounds left behind, the police are surmising that the four were armed with AK 47s as well as other guns.

The IG Punjab and other senior police officials reached the area to supervise the operation and soon after, managed to secure the building. Meanwhile, police sources said, Muaz was shifted to an undisclosed location.

However, independent analysts are dismissing the police’s theory of the terrorists wanting to secure Muaz’s release. Muaz, it is said, is a significant member of the Punjabi Tehreek-e-Taliban, originally from Muzzaffargarh, and the authorities expect him to render a great deal of useful information about terrorist networks in southern Punjab. However, since he was on life support in the ICU, analysts say, it is unlikely that his comrades could have transported him and must have meant to kill him.

Till the filing of this report, there were conflicting reports about the death toll. While the Jinnah hospital administration said 12 had been killed, DCO Lahore Sajjad Bhutta said between six and eight persons had been killed.

Jinnah hospital medical superintendent Dr Javed Akram requisitioned medical staff from other hospitals of the city to treat the injured.

Several of those injured in Friday’s attacks which killed more than 80 Ahmadis were under treatment in Jinnah Hospital.

Meanwhile, the IG Punjab says that Lahore has been put on high alert and all the entry and exit points to the city have been sealed.