'Jahang­ir Tareen is to Imran Khan what Circui­t is to Munna Bhai'
By Entertainment Desk
Published: July 31, 2018
Tweet Email 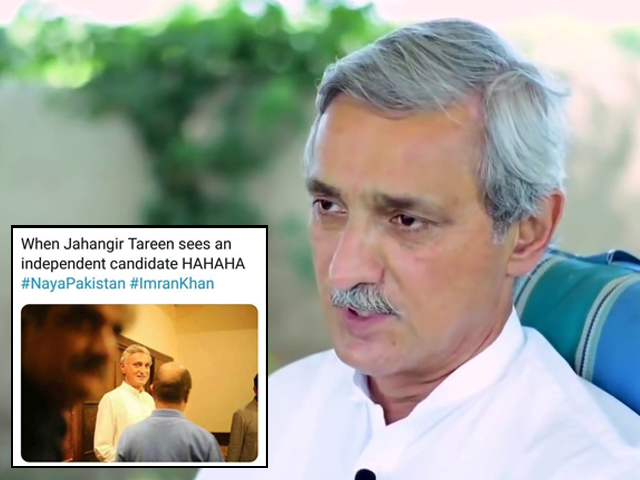 Pakistan Tehreek-e-Insaf (PTI) emerged as the biggest political force in the July 25 polls, but is still far off from reaching the magical figure of 172 out of 342 National Assembly seats.

At the moment, PTI has 168 seats. Even if it musters the support of smaller allied parties including the Muttahida Quami Movement (MQM) and independent candidates, it is still four members short of a simple majority in the lower house of parliament.

However, PTI leader Jahangir Tareen has been handed the salient task of convincing candidates to extend support to the likely upcoming government.

Meanwhile, Tareen is leaving no stone unturned in ensuring PTI emerges as the ruling party. Pictures of him alongside a few independent candidates flying in his private jet have gone viral too.  While he sent his aircraft to escort candidates to Bani Gala, Twitter is having a field day, posting funniest memes to date.

Here are our top ones:

The Tareensporter has done his job. What's going to be his new mission? Stay tuned for more.#JahangirTareen pic.twitter.com/Q8D3hnIGHO

#JahangirTareen
When you are an independent candidate and don't get a call from Jahangir Tareen pic.twitter.com/XyTFgYvH7Q