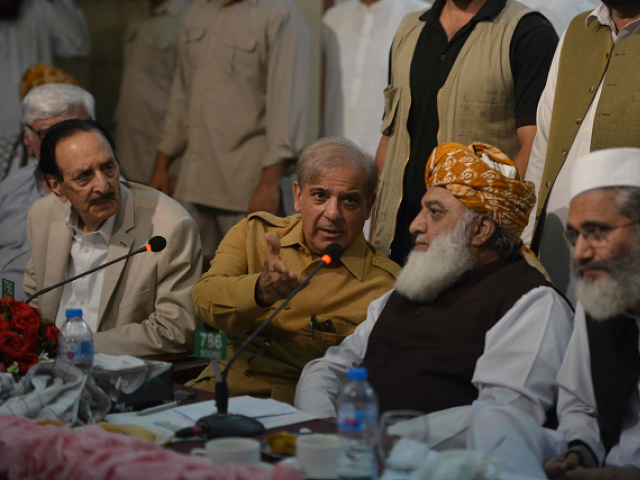 The former ruling party, the PML-N, however, refused to become part of this move saying it would internally discuss the matter before adopting a decisive strategy. PHOTO:AFP

ISLAMABAD: The All Parties Conference (APC) convened by the Muttahida Majlis-e-Amal (MMA) – an alliance of religious parties – on Friday against alleged rigging in Wednesday’s polls failed to create any ripples due to non-participation of some key stakeholders and refusal of the Pakistan Muslim League-Nawaz (PML-N) not to take oath as lawmakers of national and provincial legislatures.

There was a visible divide among the participants from the parties that faced a crushing defeat at the hands of Pakistan Tehreek-e-Insaf (PTI) in the July 25 polls with the MMA announcing that its elected members would not take oath in protest of ‘stolen public mandate’ and demanded to hold fresh polls.

The former ruling party, the PML-N, however, refused to become part of this move saying it would internally discuss the matter before adopting a decisive strategy.

The event’s significance was undermined after the third largest political force – the Pakistan Peoples Party (PPP) – as well some other stakeholders like the Grand Democratic Alliance (GDA) announced not to participate in the moot citing its ‘extensive internal commitments’ in Sindh.

Bilawal rejects results ‘but to stay in parliament’

The Muttahida Qaumi Movement, which is in talks with the PTI to become part of government at the Centre, also announced not to attend the APC. However, to the surprise of many, the beleaguered MQM leader Farooq Sattar showed up at the moot.

Senior MQM leaders – Khalid Maqbool Siddiqui and Amir Khan – later told the media that Sattar took a solo flight on the matter and attended the moot without taking the party leadership in the loop.

Barring the PML-N, all other parties that attended the moot have been wiped out by the PTI. These included MMA’s constituent parties like the Jamiat Ulema-e-Islam-Fazl (JUI-F) and the Jamaat-e-Islami (JI) as well as the Awami National Party (ANP), the Pashtoonkhwa Milli Awami Party (PkMAP) and Pak Sarzameen Party (PSP).

Leaders of these groups including the JUI-F’s Maulana Fazlur Rehman, the ANP’s Asfandyar Wali, the PkMAP’s Mehmood Khan Achakzai and the PSP’s Mustafa Kamal have lost their own seats in the general elections from their home constituencies.

Sources privy to the moot said Asfandyar put up before the conclave the idea to launch countrywide protests from July 30. Fazl supported this suggestion and went a step ahead to suggest that legislators-elect from the opposition parties should not take oath.

However, PML-N chief Shehbaz made it clear that his party would not be part of any such move and the PML-N would discuss the matter at its internal forums before ‘going for such an extreme step.’

An informed source in the PML-N said senior party leader Ayaz Sadiq, who still holds position of National Assembly speaker till new speaker is elected, told the APC participants that he would not convene the meeting of the NA for an ‘indefinite period’ to prevent the newly elected lawmakers from taking oaths.

However, Ayaz was snubbed by the PML-N chief who said the PML-N would not support this idea since delaying the maiden session of the newly elected lower house would ignite another controversy and be regarded as an unconstitutional move, the source said.

Shehbaz was of the view that the president of Pakistan primarily has the authority to call the session of the Senate or the NA. The PML-N Chairman Senator Raja Zafarul Haq and former prime minister Shahid Khaqan Abbasi reportedly supported Shehbaz’s stance.

Speaking to the media after the APC, Fazl claimed that the opposition parties agreed that fresh general election should be held as ‘public’s mandate is stolen’ in the newly held polls.

“We would not let democracy be taken hostage by any establishment,” he said, adding that “The opposition parties decided that their lawmakers-elect would not take oath as lawmakers.”

However, Shehbaz interrupted Fazl’s speech and instantly clarified that the PML-N did not agree to the idea of not taking oaths and said the matter would be discussed at party forums. He said the PML-N would support other agitation plans agreed in the APC “except the matter involving oath-taking.”

Apparently perturbed by the non-participation of the PPP, the GDA and the MQM, Fazl said: “We would hold consultations with all those opposition parties who did not attend the APC to start a national campaign against massive poll-rigging.”

Discussions with senior PML-N leaders suggest that the party leadership has neither any plans to boycott the parliament or the provincial assemblies nor it is willing to strongly pursue the demand of holding the general election afresh.

“We may join the opposition parties’ protests but these moves would have a ceremonial significance than practical motives. We have no plans to stay detached from the democratic and parliamentary process or to boycott the parliament or provincial assemblies,” said a leader.

He said the PML-N leadership was considering proposal that party legislators would attend the related sessions of the NA and provincial assemblies while wearing black arm-bands ‘to protest against rigging’.

“The leaders like Asfandyar Wali, Fazl, Achakzai and Kamal are aggrieved more at a personal level than political level since they lost their own seats in the elections and the PML-N is not going to serve anyone’s personal agenda,” he added.