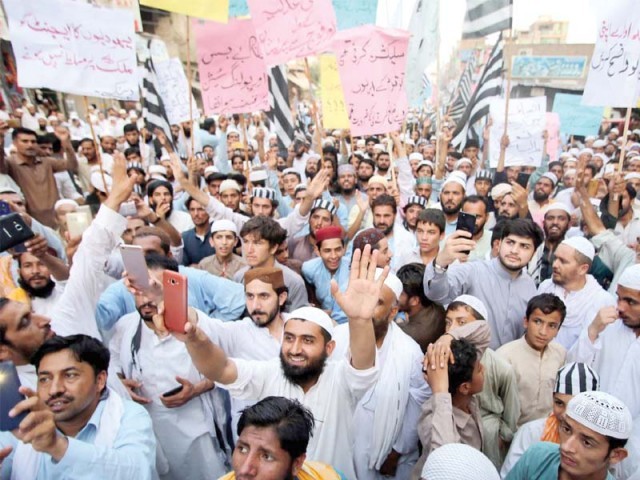 PESHAWAR: Refusing to accept the results of what they termed were ‘rigged’ elections, hundreds of protestors continued to protest for the second day in three different districts of the province.

Hundreds of JI workers and supporters of Tariqullah gathered outside the offices of the returning officer (RO) and the deputy commissioner (DC) chanting slogans against the officers of the election commission.

The JI supporters threatened that if their demands were not granted, they will move their protest outside the provincial headquarters of the Election Commission of Pakistan (ECP) in Peshawar. The RO of the district offered losing candidates to submit their applications for a recount of votes in the constituency. However, Tariqullah rejected the offer and demanded re-election on the seat.

Similarly, in Battagram where NA-12 and PK-29 were up for grabs, hundreds of supporters of losing candidates continued their protest for a second consecutive day and blocked the Karakoram Highway (KKH) for all kinds of traffic.

Workers of all parties and independent candidates protested against the victory of the PTI candidate from the area and accused the district returning officer (DRO) and associated staff of favouring the PTI.

In Shangla, candidates from the Awami National Party (ANP) and their supporters protested for a second day against the victory of Pakistan Muslim League-Nawaz (PML-N) candidate Dr Ibad and demanded re-elections.

They claimed that less then 10 per cent of women voters registered in the constituency had cast their vote – either they were prevented or a deal struck between candidates and locals. They claimed that it violates rules of the ECP and requires re-election on the seat.

Reports of similar, but small agitations were reported outside the DRO offices in various districts of the province with demands of re-election in NA and PK constituencies.

The election commission KP has started the consolidation process in the provinces, including the counting and recounting of postal ballots.

The process is expected to continue from July 28 to 29.