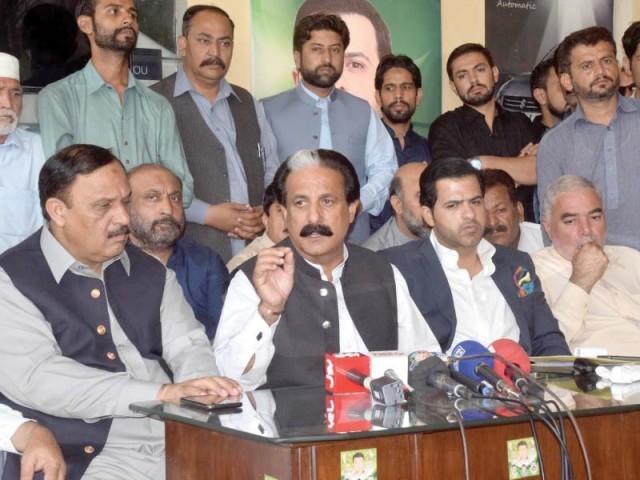 RAWALPINDI: With most of its candidates facing defeat in the city, local leaders of the Pakistan Muslim League-Nawaz (PML-N) in Rawalpindi claimed that verdict given by the public did not seem to be reflected in the final results presented by the apex poll body.

Of the seven national assembly and 13 provincial assembly seats, results released by the Election Commission of Pakistan (ECP) showed that the seats were largely won by the PTI with results of a few seats including PP-9, PP-10, and PP-13 awaited.

In the national assembly seats, elections on NA-60 were postponed owing to the sentencing and subsequent arrest of PML-N candidate Hanif Abbasi in the Ephedrine quota scandal.

The only exceptions, which meant the PTI did not do a complete sweep of the national and provincial assembly seats in Rawalpindi, were victories of Pakistan Peoples Party’s (PPP) Raja Pervaiz Ashraf from NA-58 with 125,090 votes, Sheikh Rasheed Ahmed from NA-62 Rawalpindi-VI with 117,719 votes and independent candidate Raja Sagheer Ahmed on PP-7 Rawalpindi-II with 44,287 votes.

“Such election meddling has no parallel in the history of this country,” Senator Tanveer remarked.

He went on to lament that no candidate was allowed to enter the polling station while no polling agent was informed as the ballot boxes were opened.

Tanveer also pointed to the unusual delay in the provision of form 45 to candidates and expressed distrust over the low vote count for candidates who have traditionally won from the area.

“In 2002, [Awami Muslim League leader] Shaikh Rasheed Ahmed had secured a modest number of votes while in 2008 he got 15,000 votes, a count so low that the ECP withheld his security money,” Tanveer explained, adding that their candidate for NA-62 secured 91,000 votes while 3,000 votes were rejected.

“Our polling agents were kicked out. The same formula was applied throughout Rawalpindi and other parts of the country,” he complained.

He expressed dismay over how the public’s mandate had been disregarded, noting that the chaotic atmosphere had disappointed and frustrated citizens.

“I challenge that we would win against Rasheed even if an election of a union council is held at Lal Haveli,” Tanveer said, referring to the AML chief’s famous residence in Rawalpindi.

“I am sure he cannot even win from there. If he wins, we would end our protest,” Tanveer contended.

He added that his party was gathering evidence of the irregularities in the elections and that once the exercise was complete, all the facts would be revealed before the public.

Daniyal said that the PML-N does not have the capacity to defeat hidden forces.

“The people have won and the ECP has lost,” he remarked, reiterating that polling agents were forced to sit outside during the vote counting process.

He claimed that the authorities did not provide him with form 45.

Danyal also questioned the vote count for the seat, noting that it was difficult to comprehend why he could not win in the constituency when the party had secured votes for the provincial assembly seat.

He added that the PML-N would approach the courts in this regard and would continue to protest.

PML-N Rawalpindi president and the city’s mayor Sardar Naseem said that the elections were a case of blatant rigging and that the party strongly condemned those responsible for it.

“We still believe we have won,” he said, as he reiterated their complaint of being kept outside polling stations.

“Our central committee will announce future course of action after consultations,” he announced.