Says Indian­s will come to Wagha Border and call Pakist­ani’s their master­s
By Our Correspondent
Published: July 22, 2018
Tweet Email 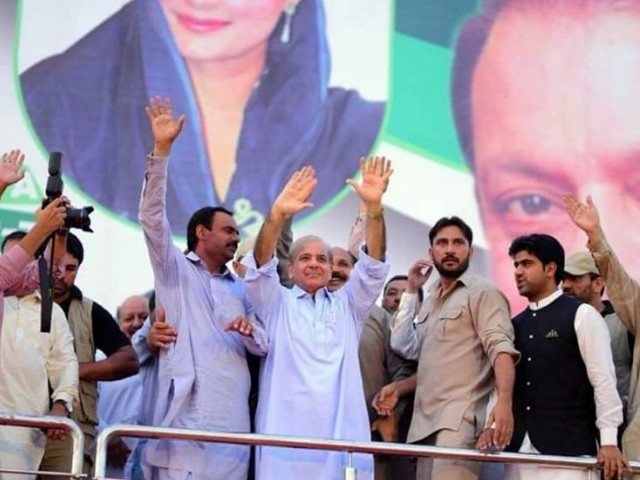 LAHORE: Pakistan Muslim League-Nawaz (PML-N) President Shehbaz Sharif on Saturday said that people can change his name if he does not take Pakistan ahead of its arch-rival India after coming into power.

Addressing a rally in Sargodha, the PML-N president said, “If I do not end load shedding crisis in six months, you can change my name,” adding “They will come to Wahga Border and call Pakistani’s their master.”

The former Punjab CM said that he would bring Pakistan at par with Malaysia and Turkey. He added that he would visit Mahathir Mohamad and Tayyip Erdogan to learn from them and make Pakistan a great nation again.

Shehbaz said that Pakistan cannot become a great nation by voting leaders like Imran Khan who have made false promises to “our nation”. The U-turn signs should be removed from roads and should be replaced by the picture of Imran Khan,” He said adding that Khan’s politics is based on baseless allegations and false promises.

“Imran Khan alleged corruption against the Punjab government but not a single penny has been proved against me,” he said adding “In fact, a corruption case has surfaced from Peshawar metro.” The former Punjab CM said that the Khyber Pakhtunkhwa (K-P) government gave contract of the Peshawar metro bus to a blacklisted company due to which the cost of the project has surged from Rs38 billion to Rs68 billion.  “The entire Peshawar city has been turned into a pile of rubble,” he added.

Shehbaz said that the court judgement on page 171 read that no corruption case has been proven against him then why was he imprisoned. “Pakistan needs justice, not revenge,” he said, adding that the people should come on July 25 and give their decision in favour of PML-N.