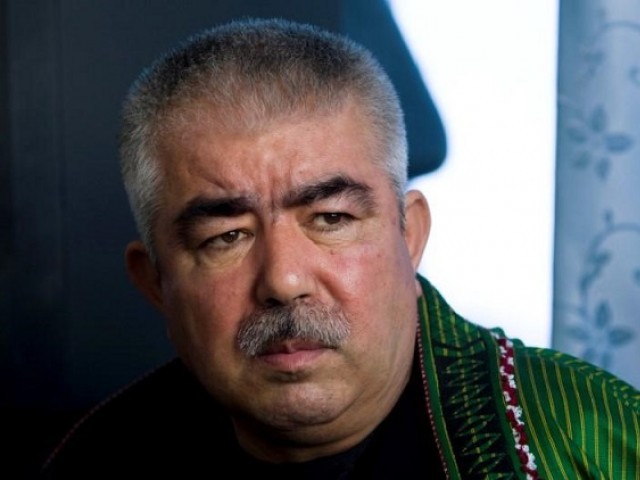 KABUL: Afghanistan’s Vice President General Abdul Rashid Dostum, who left the country last year amid allegations of sexual abuse and torture, will return home on Sunday after more than a year in exile and resume his duties, officials said.

Government spokesperson Haroon Chakansuri confirmed on Saturday that Dostum would return home on a chartered aircraft on Sunday and would be given an official reception. Accusations against him would be handled independently by the courts, he said.

“Legal issues are a matter for judicial authorities,” the spokesperson told a news conference in Kabul.

The return of Dostum followed days of sometimes violent protests by supporters in northern Afghanistan over the arrest of a militia commander loyal to him. Officials said that negotiations for the return have been going on for weeks.

Chakansuri also said the commander, Nizamuddin Qaisari, who was arrested after a violent dispute with security officials in the northern province of Faryab, would stay in prison pending an investigation, while other militia commanders accused of abuses would be pursued.

Dostum, an ethnic Uzbek veteran of decades of Afghanistan’s bloody politics, faced outrage from Western donor countries including the United States after reports in 2016 that his guards had seized Ahmad Eshchi, a political rival and subjected him to beatings, torture and violent sexual abuse.

He denied Eshchi’s accusations but amid international demands that he be held accountable, he left the country in May last year, ostensibly to seek medical treatment in Turkey and has not returned since.

Once described by the US State Department as a “quintessential warlord” Dostum has for years faced accusations of serious human rights abuses, including killing Taliban prisoners by leaving them in sealed cargo containers.

He joined President Ashraf Ghani in the disputed 2014 elections, helping to deliver support from the ethnic Uzbek community in northern Afghanistan and his return from exile comes ahead of the next presidential election in early 2019.

Dostum’s expected return adds to an already volatile mix ahead of separate parliamentary elections in October that are seen as a dry run for the more important presidential elections next year.

Protestors calling for his return closed a number of voter registration offices and threatened to disrupt the parliamentary ballot, seen as a key test of Afghanistan’s political stability.

While in exile, he formed a loose coalition with Atta Mohammad Noor, the powerful former governor of Balkh province with wide support among ethnic Tajiks as well as Mohammad Mohaqiq, a leader of the Hazara minority.