Having ruled the provin­ce for five years, PTI is the party to beat in the provin­cial capita­l
By Our Correspondent
Published: July 21, 2018
Tweet Email 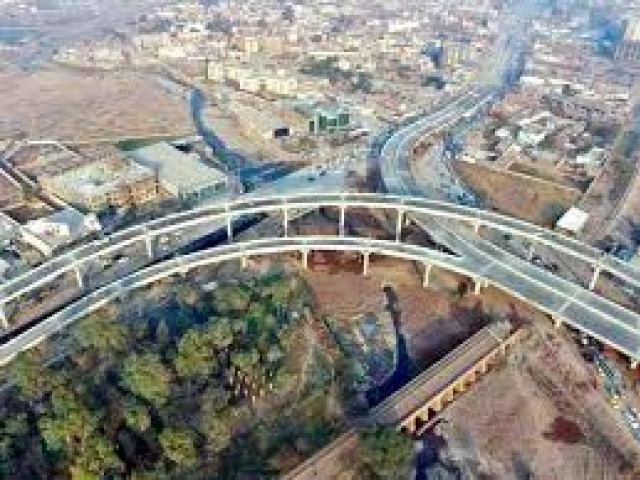 PESHAWAR: There are five constituencies in the provincial capital of Peshawar. If any party wants to succeed here, it will have to take into account several factors.

Voters for NA-27 and NA-28 reside in the urban parts of Peshawar while large swathes of NA-29, NA-30 and NA-31 comprise rural and suburban areas as well.

There are around 30 private and 20 public hospitals of varying sizes. In addition to these, there are 52 dispensaries in the city. Two new government hospitals were built between 2013 and 2017.

The quality of education in Peshawar is relatively good. Out of 144 districts, Peshawar is ranked at 83 (Alif Ailaan rankings of 2016).

There are 1,041 primary schools, 46 middle schools, 149 high school and 35 higher secondary schools in Peshawar. There are also 16 degree colleges.

From 2013 to 2017, the number of educational institutions in the district rose by two per cent.

An agricultural survey of the district shows that there has been a slight increase in the production of wheat, rice, vegetables, fruits and other commodities over the past five years.

In Pakistani politics and elections, Peshawar has always played an important role. Unfortunately, this 1,000-year-old city has always been the target of attacks by its enemies and has been deprived of attention and development.

Residents of the city call it a trash heap owing to the lack of cleanliness. While the sewerage lines have been replaced in many areas, there are still a number of neighbourhoods where the lines have rusted.

No substantial arrangements were made over the past five years to address the garbage and sewage issues of the city. The city also faces water scarcity.

Residents say the main problem they face is unemployment.

Commuters in the city say that one of the biggest problems they face is chronic traffic jams. There has been an explosion in the number of vehicles plying on the roads. However, space for these vehicles to operate has been reduced owing to encroachment.

The encroachments have successfully resisted multiple operations by the city authorities. It has now become impossible to drive through Kohati Chowk, Yadgaar Chowk, and other bazaars.

The Pakistan Tehreek-e-Insaf (PTI) had announced the bus rapid transit (BRT) project in its last year in government and spent a sum of Rs50 billion on it but the project has yet to be completed with its cost now soaring to nearly Rs70 billion.

With the PTI leaving the city somewhat worse off than how they found it, it remains to be seen how the people will vote for the party in the elections. 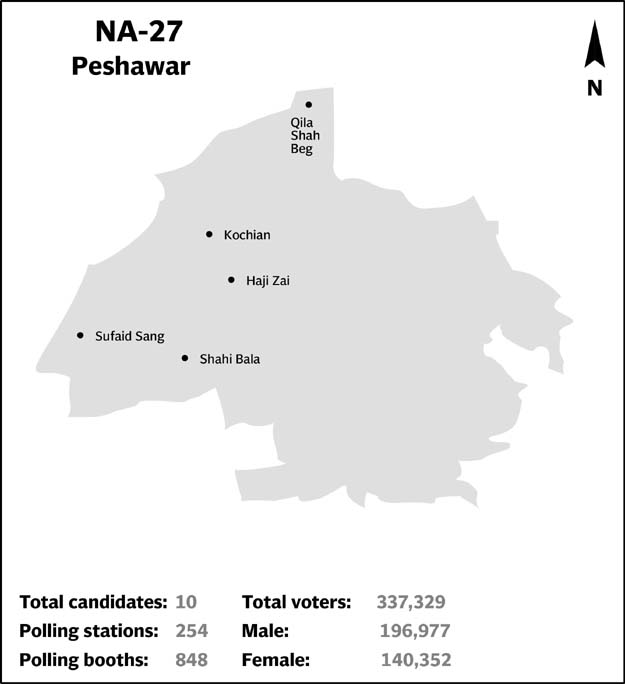 Peshawar is surrounded by tribal areas on three sides. Political clout here belongs to three main tribes including the Daudzai, Khalil and Mohmand and people prefer to vote for candidates endorsed by their community or clans (baradari).

In the city, there is a mix of population and the voting habits change.

The Hindko-speaking residents prefer to vote for residents of the city. Despite that, a number of clans have substantial political clout including the Mohammadzai, Yousufzai, Awan, Mohmand and Qureshi.

The rural areas of Peshawar district value the baradari vote. The urban areas, though, vote based on business interests.

In the May 2013 general elections, there was an average turnout of 44.03 per cent in the four national assembly constituencies of the city.

This year, the turnout is expected to increase to between 46 per cent to 48 per cent.

In the 2013 general elections, the constituency – then named as NA-3 Peshawar-III, was clinched by Sajid Nawaz of the Pakistan Tehreek-e-Insaf (PTI) who secured a whopping 66,528 votes, beating out the Jamiat Ulema-e-Islam-Fazl (JUI-F) Haji Ghulam Ali, who only bagged 27,987 votes.

In 2008, Noor Alam Khan of the Pakistan Peoples Party (PPP), had won the constituency with 27,038 votes, against 17,383 votes secured by Azizud Din of the Muttahida Majlis-e-Amal (MMA).

In 2002, Faizur Rahman had won the constituency.

Turnouts in the constituency have increased over the past two general elections.

A close friend of PPP co-chairman Asif Ali Zardari and arguably the richest member of the parliament in 2008, Noor suffered a heavy defeat in the 2013 elections. He came in fourth behind PTI’s Sajid, the JUI-F’s Ali and the Pakistan Muslim League-Nawaz (PML-N) Iqbal Zafar Jhagra.

This prompted Noor to jump ship and join the PTI. His reward has been a PTI ticket from the area,

Fortunes for the Awami National Party (ANP) and the PPP have been quite poor of late.

The ANP had won the constituency in 1992 after securing 65 per cent of all votes cast. 20 years later in 2013, they could barely muster three per cent of the votes polled.

Similarly, the PPP has also suffered ignominy in the constituency. From winning it in 2008 to being relegated to fourth, albeit marginally, in 2013. Its voting has fallen from 28 per cent to just 12 per cent.

The PML-N has garnered between 8 per cent to 13 per cent of votes. The MMA has a greater variation, attracting between 15 per cent and 48 per cent.

The PTI bagged 37 per cent of the votes from the constituency in the 2013 elections.

Overall, party loyalties of the candidates of this circle have remained the same. However, if a candidate is related to any of the major clans in the area, this usually works for them with the clans using their influence to swell vote banks.

The main battle for the constituency is expected to be between PTI’s Noor and MMA’s Ali.

Noor had done some development work in the area in the past, due to which people living in various areas of the constituency see Noor in a favourable light.

In other areas, some people have expressed their desire to vote for Ali.

With the proletariat somewhat split, the odds seem to slightly favour Noor at this point.