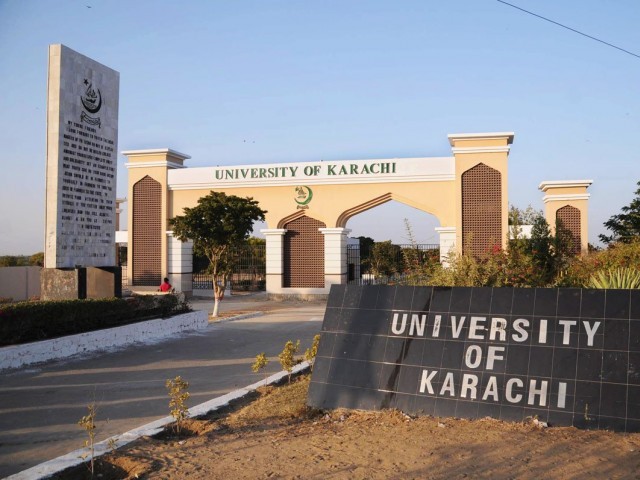 KARACHI: In terms of education and health facilities, NA-243 is the city’s nerve centre, home to some of the largest public-sector universities in the province – Karachi University, NED University of Engineering and Technology and Federal Urdu University of Arts, Science and Technology. The constituency also houses two of the largest modern private hospitals in the country – the Aga Khan University Hospital and Liaquat National Hospital. Besides, National Stadium Karachi and National Coaching Centre – the city’s iconic sports facilities are located in this constituency.

Divided into posh and slum areas, the residents of this constituency are faced by a barrage of civic issues such as acute water shortage, load shedding, dilapidated roads, broken-down sewerage system, illegal encroachments and rampant street crimes. All this despite the fact that the Civic Centre, the headquarters of the Karachi Development Authority and the Sindh Building Control Authority, lies within this constituency.

In addition to the public sector varsities, the constituency also houses the Sir Syed University of Engineering and Technology, one of the largest private universities in the city. Besides, the National Institute of Blood Disease – considered to the largest facility for patients with blood cancer – is based in this constituency.

What this constituency lacks, however, is a public hospital. Around eight years ago, the Sindh government had initiated the construction of a 400-bed hospital at NIPA Chowrangi. The facility was later handed over to a retired surgeon of Jinnah Postgraduate Medical Centre, who is believed to be a close aide of former president Asif Ali Zardari. The hospital, which has yet to be made functional, will now operate as an orthopedic facility.

In terms of sports activities, NA-243 finds no parallel in the city, with the country’s oldest cricket stadium – National Stadium – located opposite the National Coaching Centre, which hosts national-level athletic games. The Karachi Hockey Association’s ground is also located on University Road, besides the hockey ground named after Olympian Iftikhar Syed, located in Gulshan-e-Iqbal Block 6. 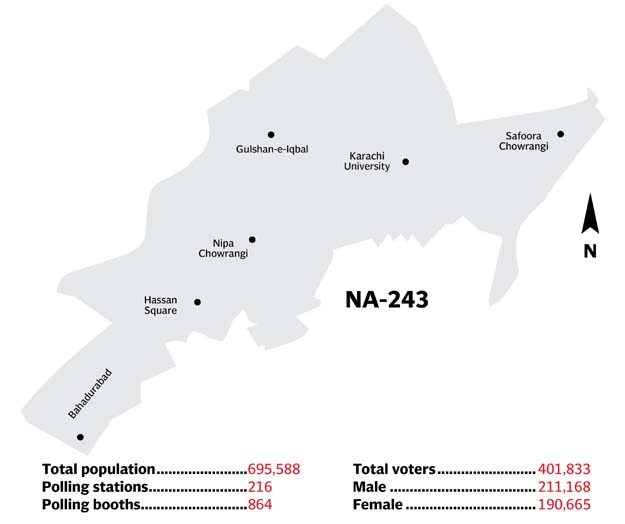 At the junction of University Road and Sher Shah Suleman Road lies the iconic Expo Centre, which hosts national and international exhibitions and seminars. Some of the city’s biggest parks – Safari Park, Aziz Bhatti Park, Alladin Water Park and Sindbad – are located in this constituency. After years of neglect by the Karachi Metropolitan Corporation, the Safari Park seems to have lost much of its former beauty, with few animals remaining at the facility and even the chairlift no longer functional. However, it is still a popular picnic spot for hundreds of citizens every weekend. The Aziz Bhatti Park has seen a similar decline, with the boundary walls and jogging track broken in several places. Unhinged by the deterioration, scores of residents religiously visit the park each morning for jogging and exercise.

PTI joins hands with cleric on US terror list

Behind the façade of these major establishments, the constituency is faced with bitter realities that make the lives of its residents miserable on a daily basis. The foremost concern is an acute shortage of water. Those from lower-income households must walk long distances to fetch water in makeshift containers from public taps. Others who can afford water tankers must pay huge sums for a steady supply.  Almost all the areas falling within the Gulshan-e-Iqbal sub-division areas have an abysmal sewage system. Other areas are dotted with ill-planned concrete structures with no thought for waste disposal.  Many roads and streets including Dalmia Road, which was renovated just a few months ago, have been dug up again for utility lines.

Besides, large areas adjoining University Road and Rashid Minhas Road have been encroached, causing traffic jams on a regular basis. Restaurant owners have laid out seating arrangements from Hassan Square to NIPA Chowrangi, where customers often park their vehicles on the roads, disrupting the flow of traffic. University Road was relaid recently at a cost of Rs1.24 billion. Frequent power cuts and rampant street crime are other major areas of concern for residents of this constituency.

Once a largely residential area of one-plus storey bungalows, the area has seen rampant commercialisation over the last decade or so. High-rise buildings have been constructed on amenity plots, obtained through nefarious means in connivance with government agencies. The provincial government and KMC officials’ apathy and greed has decreased the Safari Park land from 407 to 257 acres. Besides, hundreds of acres of land have been occupied by private institutions and the land mafia, with legal cover provided by the government agencies.

NA-244, a strange mix of the haves and have-nots