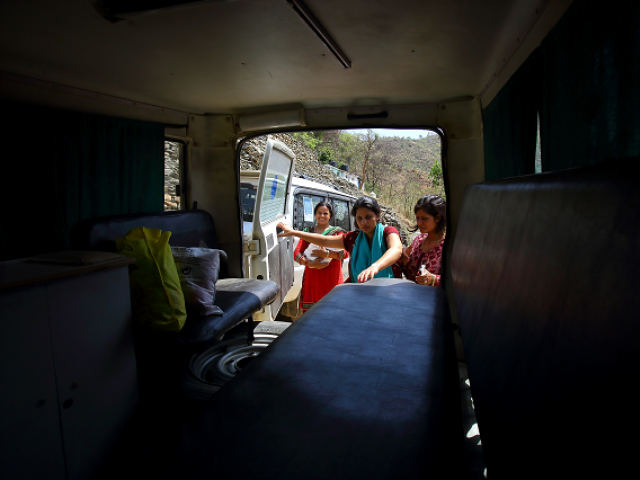 Nepali mother Pabitra Dhungel getting into an ambulance a day after giving birth, at a health centre in the Ramechhap district. PHOTO: AFP.

RAMECCHAP: As a teenager Meera Nepali was terrified as she went into labour with her first child at home in a remote village, miles from a hospital with nobody but her mother-in-law to help.

“I was a scared, but that was the norm. We didn’t have doctors close by,” Nepali told AFP of her three-day labour in Khadadevi village in Nepal’s hilly Ramechhap district.

This year however, she delivered her second child in a rural health centre thanks to a small cash incentive that is getting pregnant women to hospital by paying their bus fares. 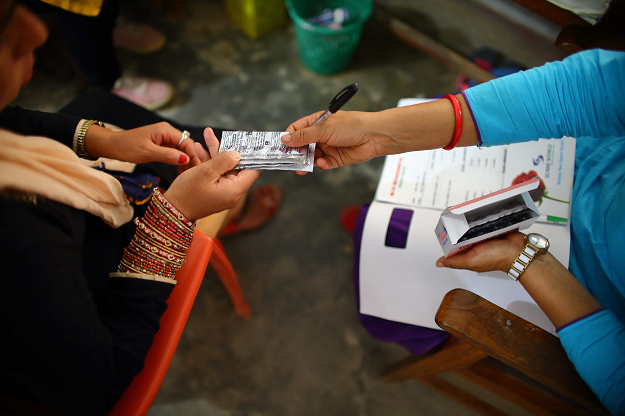 Nepali health worker giving free medicine to a pregnant woman at a health centre in the Ramechhap district. PHOTO: AFP.

The Aama Surakshya, or “protection for mothers”, programme has helped more than two million Nepali women access medical services in the impoverished country where dying in childbirth remains a very real risk.

The UN Population Fund says giving birth remains a leading killer of women of reproductive age in Nepal, where the risk of dying in childbirth is higher than anywhere else in South Asia except Afghanistan.

A huge obstacle to safe deliveries is the Himalayan nation’s tough terrain, which often makes getting to a health facility a long and expensive journey, as well as the paucity of clinics in many parts of the country.

“We found that one of the main reasons rural women did not go to a hospital during childbirth was because they did not have hard cash to pay for transportation,” said Suresh Tiwari, one of the original architects of the scheme.

The programme was started in 2005 with British aid money, but has since been taken over by the Nepal government. 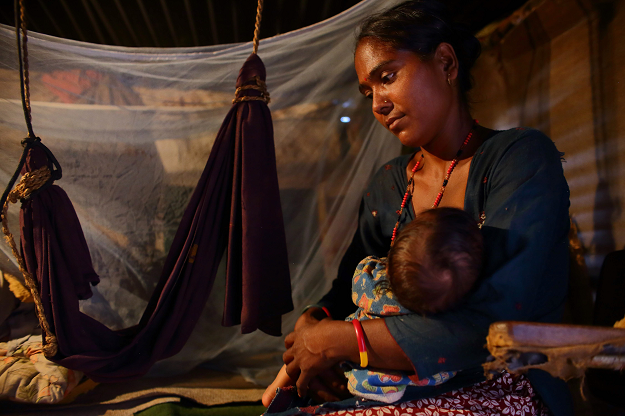 Nepali mother Sita Khatri with her young son at her home in the Ramechhap district. PHOTO: AFP.

Today, it covers not just transport but medical costs for mothers and babies and includes a cash bonus for attending antenatal check-ups.
2017 marked a milestone for the programme: more Nepali women opted for hospital births over home deliveries for the first time on record, official figures show.

“The free service and transport incentive have been very effective in bringing women to health centres and hospitals where they can be saved in the case of complications,” said Tara Nath Pokharel, head of the government’s Family Health Division, which now runs the programme.

Nepali, one of the beneficiaries, paid nothing for her three-day stay at a clinic in Ramechhap district, east of Kathmandu, in January.

She was discharged with 1,000 rupees ($9) for transport plus a 400 rupee bonus for attending four antenatal appointments.

“I returned home in an ambulance. We hardly had to spend anything. I am really grateful for this facility,” Nepali said, cradling her young son in her arms.

The scheme is also saving lives outside the maternity wards, in part by tackling cultural obstacles. 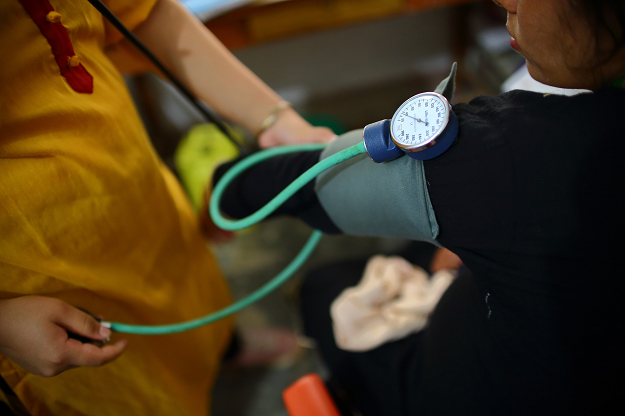 Nepali health worker checking the blood pressure of a pregnant woman at a health centre in the Ramechhap district. PHOTO: AFP.

Sita Khatri went into labour weeks before her due date and, unable to walk the three hours to the nearest health centre, gave birth to a healthy boy at home.

But the 27-year-old suffered a retained placenta, a painful and potential fatal complication of childbirth, and had to plead with her husband to take her to hospital.

“He said we don’t have money. I insisted, saying there are government facilities, we won’t have to spend too much,” Khatri said.

“It is better to go the hospital than to die at home.”

Eventually Khatri’s husband relented, and she was treated for free at a nearby clinic. The couple were also given 1,000 rupees to pay for transport.

Women doctors use technology to bring healthcare to rural Pakistan

But some women cannot be reached by road and must be carried, while others encounter poorly equipped facilities once they arrive, said Niliza Shakya, a doctor at a health centre in Ramechhap.

“Some women still don’t have the decision-making power to say they want to go to a hospital, and health posts like ours are not equipped enough,” said Shakya.

Nepal managed to reduce maternal mortality by 71% between 1990 and 2015–just missing out on an ambitious Millennium Development Goal to reduce the rate by three-quarters.

But it has a long way to go in improving the overall quality of its healthcare, said Binjwala Shrestha, a charity worker from the Safe Motherhood Network Federation of Nepal.

“Reaching the hospital alone is not enough,” she said.