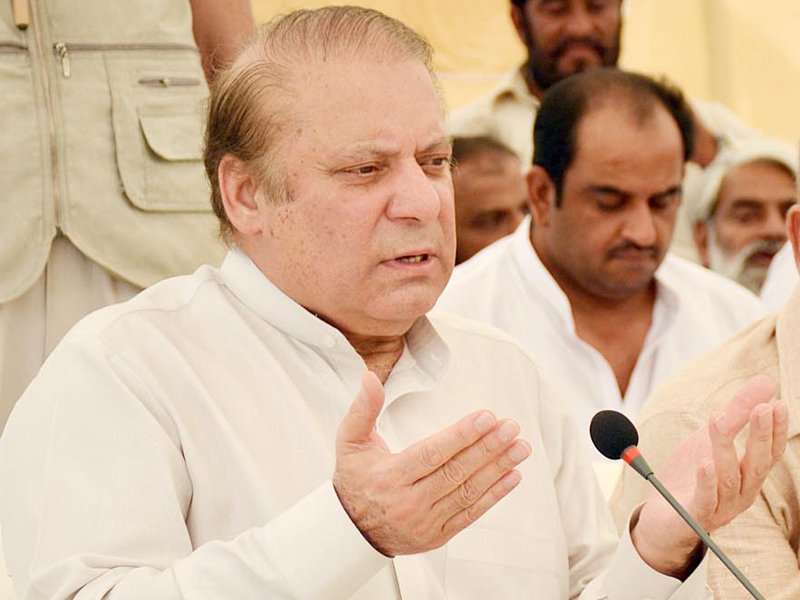 ISLAMABAD: Former premier Nawaz Sharif, his daughter Maryam and son-in-law Captain (retd) Safdar will stay behind the bars when their party goes into the general elections on July 25 as the Islamabad High Court (IHC) has adjourned the hearing of their appeals against their conviction till the last week of July.

The trio – convicted by an accountability court on July 6 in Avenfield Apartments case – had filed two separate petitions against the trial court’s order, seeking suspension of sentences and transfer of the pending two National Accountability Bureau (NAB) references to some other accountability court.

However, the IHC on Tuesday adjourned the hearing on their petitions till the end of this month, eliminating all chances of three members of the Sharif family, who are incarcerated in Rawalpindi’s famous Adiala Jail, to come out of their captivity before the election.

The IHC’s division bench, comprising Justice Mohsin Akhtar Kayani and Justice Miangul Hassan Aurangzeb, issued notices to NAB for the next hearing after arguments by Sharif’s counsel, Khawaja Haris, and the couple’s counsel, Amjad Pervaiz, on the appeals, writ petitions and transfer application.

In their arguments, the counsels pointed to different flaws in the accountability court’s judgement and hoped that the IHC would suspend the verdict or issue notices to NAB for a hearing before July 25.

The bench, however, observed that since the IHC administration has not notified the division bench for the next week, the cases are adjourned until the last week of July subject to availability of the bench.

Earlier, while arguing before the bench, Haris said, “Nawaz Sharif’s known sources of income and the value of assets [Avenfield Apartments] is not in evidence or anywhere in the judgement”.

He said the prosecution has failed to ascertain on what date the Avenfield Apartments were purchased, what was their actual price and who purchased the properties from whom.

He said the prosecution did not fulfil the ‘four ingredients’ as it could not link Sharif with the Avenfield properties.  These ingredients were: (a) the accused was holder of public office, (b) nature and extent of pecuniary resources or property which were found in his possession, (c) what were his known sources of income to prosecution after thorough investigation and (d) such resources or property found in possession of accused were disproportionate to his known sources of income prosecution

He said the prosecution did not produce any record to establish Sharif’s ownership of Avenfield apartments. Justice Aurangzeb reconfirmed if the counsel meant that burden of proof did not shift on accused because the prosecution failed to establish its case by fulfilling the four ingredients. Haris replied in affirmative.

“So what is the evidence against you that connects you with the offences,” Justice Kayani enquired. Haris replied that the trial judge has stated in the judgement that “generally children remain dependent on their parents during their tender ages, therefore, accused No 1 [Nawaz Sharif] cannot say that he had not provided any money to them to purchase the apartments.”

Contrarily, Haris said, prosecution’s star witness Wajid Zia had admitted before the court that Sharif’s children are not dependent on him but this part of the testimony is not mentioned in the final judgement. Moreover, the word “benamidar” is defined in the NAB Ordinance of 1999 and it doesn’t mention children.

Also, he said, it was prosecution’s job to establish that Sharif was the owner of the properties and children were dependent on him. “So you are saying the chain of evidence is missing,” Justice Kayani enquired. Haris replied in affirmative and added that entire evidence is based on heresy. He said the prosecution had to discharge onus first without looking at defence at all.

Like Sharif, Pervaiz said, Maryam is also not the owner of the properties but alleged to be the beneficial owner of the London properties, adding that unless prosecution crosses the barrier of proving its case against Sharif they cannot go ahead.

Regarding trust deeds of the Nielson and Nescoll, Pervaiz said the court passed the judgement against Maryam for preparing forged trust deeds on the basis of the opinion of the forensic expert Robert Radley.

Sharifs file appeal in IHC against their conviction

He argued that Radley told the JIT that the deeds were not genuine for being written in Calibri font in Feb 2006 when it was not commercially available yet, the expert himself admitted that he was using the font in 2005 and also informed the trial court about three different methods of downloading the font.

For Safdar, Pervaiz said, in the 174-page judgement, the judge mentioned Safdar only once, that too for convicting and sentencing him on two counts. “Apart from the line where he is convicted and sentenced, there is no discussion about Captain Safdar in the entire judgement,” Pervaiz said.

During the hearing, Justice Kayani said he has read the judgement and it mentions about Sharif’s speeches in the assembly and petitioners’ interviews on different television channels.

He asked what the counsel has to say about it. Haris replied that the court has convicted petitioners without deciding questions raised on the admissibility of the CDs in the final judgement.

To a question on whether the signatories of the trust deeds – Maryam, Safdar, Waqar Ahmed, a UK-based solicitor Jeremy Freeman – own their signature, Pervaiz replied in affirmative.

To a query on whether the deeds were registered, Pervaiz said registration was not required under British Virgin Island or English laws. Also, he said, this is not the prosecution’s case against the petitioners. Later, the court issued notices to NAB for the last week of July without suspending the judgement.