Clarif­ies that Haroon was killed by TTP, but mainta­ins hidden hands at play
By Hidayat Khan
Published: July 17, 2018
Tweet Email 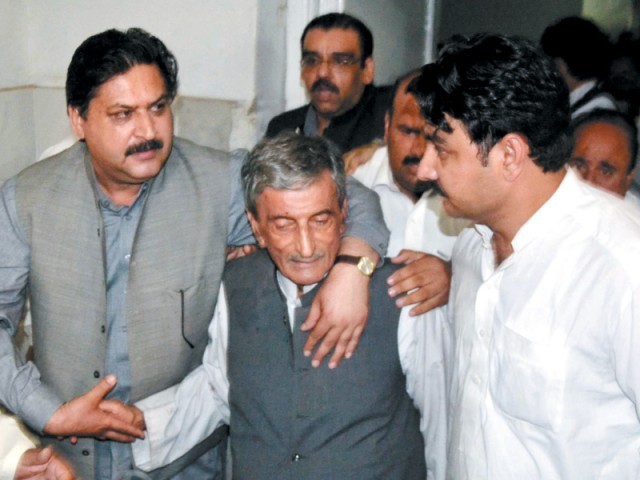 Ghulam Bilour is brought to a hospital after the blast. PHOTO: MUHAMMAD IQBAL/EXPRESS

PESHAWAR: A day after he said that an ANP leader was not killed by militants, rather by those who benefitted from his death, a senior party figure and former federal minister clarified that militants were indeed behind the attack but it must be investigated for any further linkages.

Awami National Party (ANP) information secretary and candidate for the Khyber-Pakhtunkhwa assembly seat PK-78 Haroon Bilour had been attending a corner meeting in the Yakatoot area when a suicide bomber targeted him. In the subsequent blast, Haroon was martyred along with 22 others while 63 were injured.

The attack was claimed by the Tehreek-e-Taliban Pakistan (TTP).

ANP senior leader and Haroon’s uncle Ghulam Ahmad Bilour had that it was not the terrorists who were responsible for the attack.

“My nephew was not martyred by the TTP, but people who drew benefit from his death were involved. Not TTP, but our own people killed him and we have all the details,” Bilour had stated while speaking to Express News on Sunday.

On Monday, though, he clarified his statement, that it was indeed the TTP who detonated the bomb which killed Haroon.

However, he went on to say that a role of his political opponents, who stand to benefit from Haroon’s death, cannot be ignored either.

Addressing news conference at the Peshawar Press Club on Monday, he said that the attack must be investigated from all angles. Ghulam, though, did not take any names as he cast suspicious glances at all the 16 candidates who were contesting from PK-78.

Bilour was earlier quoted about the involvement of ‘our own people who can be benefited’ from Haroon’s murder.

Citing his political conviction, Ghulam hinted that there may be opponents who, in the grab of terrorists, may have carried out the attack to gain political benefits.

“In the past, the ANP was targeted as it was in government in K-P and was on the frontlines, opposing the Taliban and terrorism,” the former federal minister explained.

“But now, the party is not in government. Then why are ANP workers and their leadership targeted.”

He demanded that the attack must be properly investigated from every angle.

He went on to blame the policies of successive governments for employing ‘jihad’ to achieve their interests.

The ANP leader clarified that their party had always opposed this policy and had even warned the policymakers that it could have dire repercussions for the generations to come.

This warning, he lamented, was ignored.

Rejecting the impression of any disunity in ANP ranks, Ghulam said that their party stands united and that they remain committed to contesting the elections since their campaigns were still underway despite the presence of hidden hands.

“The ANP will contest the elections at any cost,” Ghulam said.

He also spoke against the current wave of judicial activism and complained that Chief Justice Mian Saqib Nisar had ordered the withdrawal of security from politicians, including Haroon, immediately after visiting Peshawar.

“The CJP has no right to interfere in the administrative affairs and should only focus on judicial matters,” he said as he called for providing complete security to the Bilour family and to the leadership of other political parties.

Talking about Haroon’s son, Danyal Bilour wish that his mother should contest election from PK-78 for which late Haroon was contesting, Bilour said that if his mother wants to contest the election, he will have no objection on it.

Bilour also asked the Election Commission of Pakistan to re-name his constituency as NA-1 because it has a historical importance associated with the city. “Changing numbers of the constituencies was totally unnecessary,” said senior Bilour.

Not for show: PTI senator accused of sowing discord