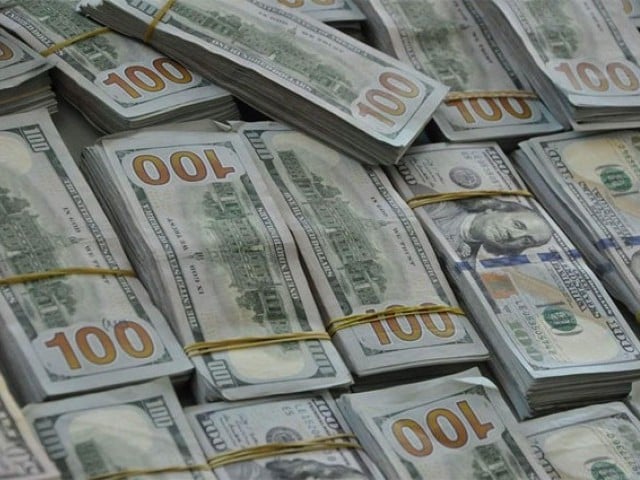 KARACHI: Pakistani currency has further weakened 5.3% to Rs128 to the US dollar in the inter-bank market on Monday, the State Bank of Pakistan (SBP) reported.

On Friday, the currency closed at Rs121.55 in the inter-bank market.

Before the day closure, the market saw the rupee hitting an all-time intra-day low of Rs129.4 to the greenback, according to market sources.

“This movement in the exchange rates reflects the demand-supply gap of foreign exchange in the inter-bank market,” the central bank said in a press statement.

Brace yourself for inflation as the rupee takes a hit

Pakistan’s foreign expenditures remain much higher than its income. The higher expenditures are being partly financed by the SBP’s foreign currency reserves, which accordingly depleted to the critically low level of less than two months import cover at $9.47 billion on July 6, 2018.

The rupee depreciation was meant to reduce demand for dollars in the economy and help the reserves stabilise.

In the monetary policy announced on Saturday, the SBP said FY18 ended with a real gross domestic product (GDP) growth at a thirteen-year high. However, this high growth has been accompanied by a notable deterioration in the country’s balance of payments.

SBP is of the view that this adjustment in the exchange rate along with the increased policy rate and other administrative measures, would help contain domestic demand in general, and reduce the imbalances in the country’s external accounts in particular.

“SBP will continue to closely monitor the evolving fundamentals of the economy, and stand ready to ensure stability in the financial markets,” it said.

This was the fourth round of devaluation since December 2017 when the currency was hovering around Rs105.5 to the dollar. Cumulatively, the rupee has lost over 21% against the greenback as economic managers move desperately to curtail a widening current account deficit and stop the slide of depleting foreign exchange reserves.

The latest round of devaluation also comes at a time when the caretaker government is opening the process of seeking a bailout from the International Monetary Fund (IMF) to enable the incoming government to move along quicker if it chooses to exercise the option.

The bailout would be meant to fix a balance of payments crisis as reserves drop to less than two months of import cover.

On Saturday, the State Bank of Pakistan (SBP) also increased the interest rate by 100 basis points to 7.5%, choosing the monetary policy tool at its disposal to curb aggregate demand and control imports.

“Prime minister, finance minister, and the SBP governor are the only three people who [mutually] decide what would be the Real Effective Exchange Rate (rupee-dollar parity),” SBP Governor Tariq Bajwa said while announcing the increase in benchmark interest rate on Saturday.

“Real Effective Exchange Rate and monetary policy (benchmark interest rate) are the two effective tools available with the central bank to deal with the situation. We are using both of them,” he said.

The inter-bank market where commercial banks accumulate dollars on behalf of industrial and commercial importers opened with massive pressure on the rupee.

The situation did not let the currency dealers in the open market resume business in the first half of the day. They voluntarily halted transacting in dollars, awaiting clarity on rates and the extent to which the rupee would fall. “We resumed trade in the second half,” a Karachi-based dealer said.

Pakistan Forex Association President Malik Bostan said rupee devaluation is being done on IMF directives as the caretaker government is setting the ground for availing a bailout by the incoming government.

“The caretaker government is doing what the previous government should have done to avert the reserves’ crisis. If it would not have come into action, the incoming government would be expected to do so. In other words, it is making the job easier for the new government,” he said.

The rupee should stay at this level now, he added. “If it losses further under the caretaker government setup, it may maximum go down to Rs130 to the dollar.”

Exchange Companies Association of Pakistan (ECAP) General Secretary Zafar Paracha said the depreciation would trigger a fresh wave of inflation. “In its first reaction, the government is expected to increase petrol prices, which would make everything expensive in the country,” he said.