Haroon killed by ‘our own’ people not Taliban: Ghulam Ahmed Bilour

Haroon killed by ‘our own’ people not Taliban: Ghulam Ahmed Bilour

Senior ANP leader says his nephew was martyr­ed by 'people who benefi­ted from his death'
By Our Correspondent
Published: July 15, 2018
Tweet Email 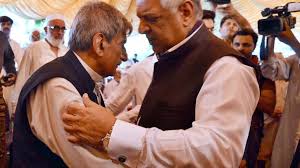 Senior ANP leader says his nephew was martyred by 'people who benefited from his death'. PHOTO: APP/FILE

PESHAWAR: Despite Tehreek-e-Taliban Pakistan’s claim, senior leader of Awami National Party (ANP) Ghulam Ahmad Bilour has said that his nephew Haroon Bilour was not killed by the banned outfit but by ‘our own’ people.

“My nephew was not martyred by TTP but people who benefited from his death are involved … not TTP but our own people killed him and we have all the details,” Bilour said while speaking to Express News on Sunday.

“What benefit TTP could achieve for killing my nephew?” he questioned, adding that their opponents thought ANP will refuse to contest polls out of fear.

“They think we will step back … they will be killing us and we will not be stepping back and will contest for both national and provincial assembly seats,” he stated.

A candidate who could win polls will be pitched for PK 78, Bilour added.

At least 23 people, including ANP leader Haroon Bilour, were martyred and over 60 others injured in a suicide bombing targeting the party’s rally in a congested neighbourhood of Peshawar on Tuesday.

The attacker detonated his explosive belt close to the ANP leader’s vehicle as he approached a rally organised to promote his election in Yakatoot area of the Khyber-Pakhtunkhwa capital.

Rescue teams and security officials shifted the deceased and injured to the Lady Reading Hospital (LRH) soon after the attack.

Claiming responsibility for the attack, the TTP termed the assassination ‘revenge for ANP’s previous government’. The statement warned of further such attacks.

Bashir Bilour, the father of Haroon, was also martyred in a suicide bombing targeting his rally in the fabled Qissa Khawani bazaar of Peshawar in December 2012.

The outlawed TTP had also claimed responsibility for that attack.