Tens of thousands march through London in anti-Trump protests

Tens of thousands march through London in anti-Trump protests 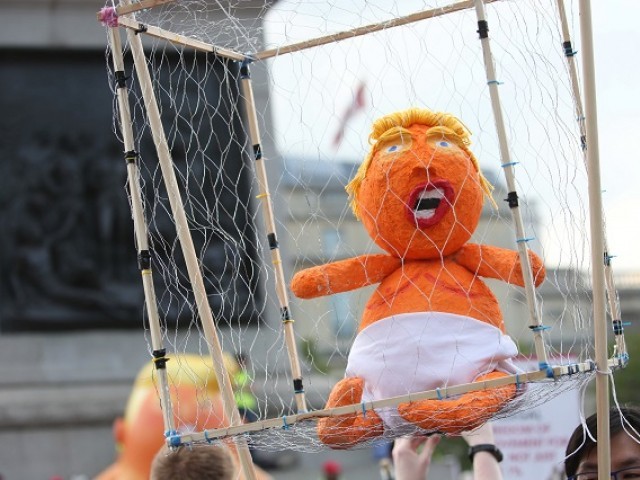 A baby Trump in a cage is seen in Trafalgar Square as a demonstration against the UK visit of US President Donald Trump takes place in London on July 13, 2018. PHOTO: AFP

LONDON: Tens of thousands of people turned central London into a sea of protest on Friday against US President Donald Trump, whose four-day visit to Britain has been marred by his extraordinary attack on Prime Minister Theresa May’s Brexit strategy.

The streets of the capital were packed with placard-waving, slogan-singing demonstrators, intent on showing their vehement disapproval of the divisive American leader, in one of the biggest British protests in recent memory. 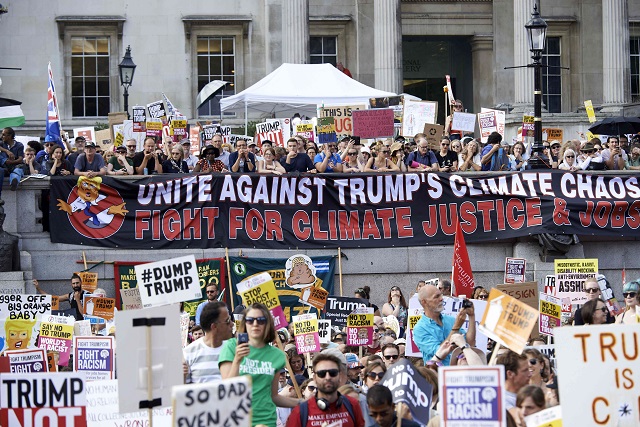 Protesters against the UK visit of US President Donald Trump gather in Trafalgar Square after taking part in a march in London on July 13, 2018. PHOTO: AFP

“I don’t agree that we’ve allowed Trump to come to this country as if we’re united with him we’re not,” said Connie Brazier, 32, who travelled from the city of Portsmouth on Britain’s south coast.

“Everything he stands for is disgraceful.”

Organisers estimated more than 250,000 people attended the centerpiece of the organised action: a march through several city centre arteries ending in Trafalgar Square.

The march was organised by the Stop Trump Coalition, a network of grassroots campaigns, unions, NGOs and politicians formed for the event.

“Today’s protests send a signal to Donald Trump,” he added.

“He’ll get the message. He may not admit it publicly but he’s certain to be affected by this outpouring of opposition.”

Demonstrators began the day by flying a giant balloon near the British parliament depicting Trump as a nappy-clad baby an act of protest approved by London mayor Sadiq Khan to the fury of Trump supporters.

“I think it’s hilarious,” said 23-year-old Paul Fonseca. “It’s an accurate representation of his politics which are so immature. He never enters into adult discussion.”

A women’s march through the capital to Westminster followed, including activists from the LGBT community.

Trump faces ‘carnival of protest’ on trip to Britain

Among the eye-catching placards, one read: “My mum doesn’t like you! And she likes everyone.”

Around 20 drag artists joined the throng under the rallying cry “Donald Trump is a real drag” starting out from Soho, the historic heart of Britain’s gay community, in flamboyantly colourful attire.

“I think he’s just such a poor representation of what America has to give to the world,” said Joey “Bourgeoisie” Frenette, 27, who moved to Britain eight years ago from Washington DC.

Decked out in chunky heels and fishnet stockings, a purple tinsel wig, pink lipstick and a dyed green moustache, he felt compelled to protest after seeing by Trump’s immigration policies, he added.

Grant White, 32, carried a sign depicting Trump as the Twitter bird symbol wearing a swastika around his arm.

“I am anti-Brexit, anti-Trump. There is a wave of fascism which we have to get rid of,” he said.

Stopping outside May’s residence in Downing Street, protesters whistled and shouted: “Shame on you!”

Londoners not protesting and stopping to take in the mass of people, placards and sloganeering seemed supportive of the demonstrations.

“He brings it on himself it’s like having a juvenile in charge of a superpower,” said construction worker Dan Kelly, 47.

Protesters had vowed to turn out in force ever since May offered Trump a state visit to Britain soon after he took power in January last year.

Following a series of diplomatic spats it became a “working visit” which still saw the convention-shattering president meet Queen Elizabeth II for tea at Windsor Castle Friday as demonstrators massed in London. 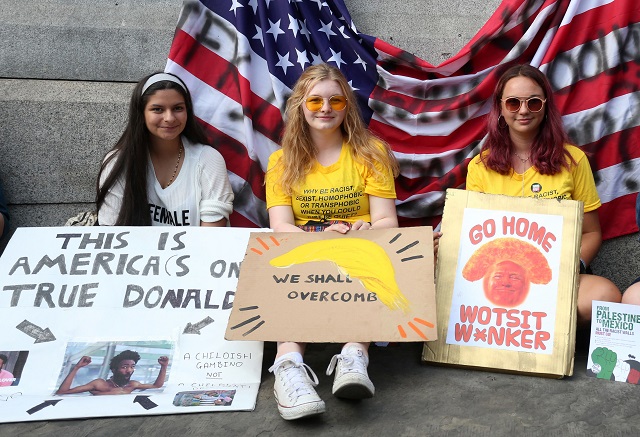 Protesters hold placards in Trafalgar Square as a demonstration against the UK visit of US President Donald Trump takes place in London on July 13, 2018. PHOTO: AFP

A carnival atmosphere descended on the city as protesters banged on drums, pots and pans while others blew trumpets.

The crowd stretched for more than a mile along the protest route, as Trafalgar Square reached capacity.

On a message board in Trafalgar Square, protesters had scrawled hundreds of Trump-themed messages.

They ranged from the farcical “Trump, you’re a wasterman!” to the sincere: “Kindness and compassion matter”.

Ahmed Hassan, 23, born and raised in Manchester in northern England to Pakistani parents, was among those leaving a message with Trump in mind.

“I think it’s great to see so many people calling out his bigotry,” he said, adding the president’s stances were “not part of British values”.

His message, written in black felt-tip pen: “Immigrants: we get the job done.”