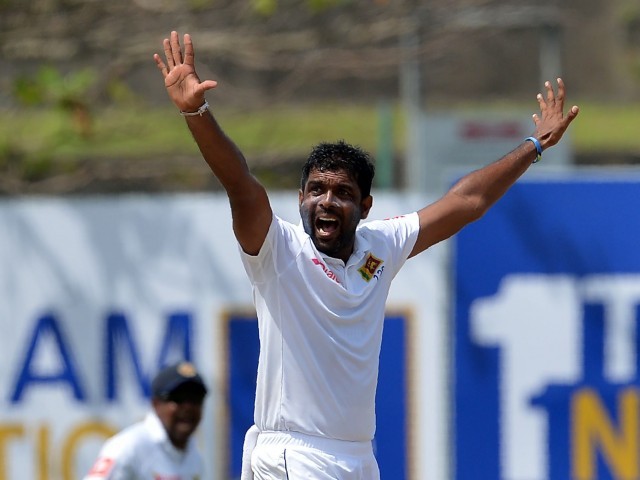 Perera, who took three wickets in the morning session with his off-spin, stood out for the hosts with impressive figures of 4-46 from his 23 overs. PHOTO: AFP

GALLE: Stand-in-skipper Suranga Lakmal and Dilruwan Perera starred as Sri Lanka skittled South Africa for just 126 on Friday — their lowest Test innings in the country, leaving them with a mountain to climb as day two ends with Sri Lanka on 111-4; 272 runs ahead of the Proteas.

The visitors’ batting fell apart against the spinners while responding to Sri Lanka’s 287 in the first Test in Galle. Skipper Faf du Plessis top-scored with 49 before the South African innings folded in the second session.

The dismal effort set a new low for South Africa in Sri Lanka, worse than their 169 at the SSC in 2006.

It was the spinners and Lakmal’s late pace burst that put the hosts on top in the fast-paced five-day contest.

Perera, who took three wickets in the morning session with his off-spin, stood out for the hosts with impressive figures of 4-46 from his 23 overs, while Lakmal picked up three including the prized scalp of du Plessis.

The 64-run seventh-wicket partnership between du Plessis and Vernon Philander, who made 18, was the best that South Africa could muster in their 54.3 overs.

Lakmal did not bowl at all until the 37th over of the innings, but was effective after lunch on day two, rattling the off-stump of du Plessis with a delivery that jagged in sharply.

Lakmal then quickly got rid of the number nine and 10 batsmen to end the innnings with figures of 3-21 from only 4.3 overs.

On Thursday, opener Dimuth Karunaratne gave Sri Lanka a fighting total with his unbeaten 158 after the hosts elected to bat first at the start of the two-match series.