US judge orders older childr­en to be reunit­ed with their famili­es by July 26
By AFP
Published: July 12, 2018
Tweet Email 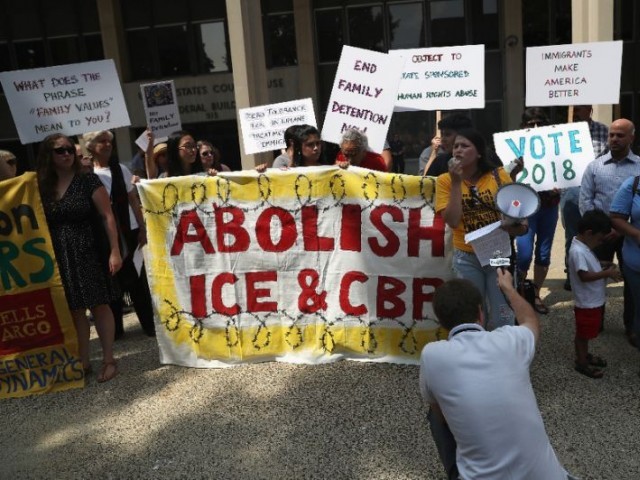 The coalition of activists called on the Republican president to abolish the US Immigration and Customs Enforcement agency (ICE), outside a facility in Harlem where around 250 migrant children have been housed without their parents being informed.

At total of more than 2,300 children were split up from their families as a consequence of the administration’s “zero tolerance” practice that saw their parents prosecuted for illegally crossing the border with Mexico, even if they did so to seek asylum.

Many are fleeing gang violence and poverty in Central America.

Activists said two daughters, aged five and nine, of a Honduran asylum seeker identified only as Hector are still at the Harlem centre despite their father’s best efforts to retrieve them.

The girls were separated from their mother at the border in June. She is still in detention.

Following domestic and global outcry over family separations, which saw children moved all over the United States, Trump ended the practice on June 20.

But his administration failed to meet a court-imposed deadline, which initially expired on Tuesday, for reuniting parents with children aged five and under. A San Diego judge has since accorded the US government more time.

The judge has also ordered older children to be reunited with their families by July 26.

The New York Times reported late last week that, under pressure to re-unify the families, authorities were struggling to connect them after records linking children to their parents disappeared and in some cases were destroyed, though not as part of a deliberate attempt to obfuscate.

“Donald Trump and his administration do not want to reconcile and reunite these families,” he told reporters outside the migrants’ centre in America’s most populous city, which votes overwhelmingly for the opposition Democratic Party.

US and Mexico vow to reunite separated migrant families quickly

“This cruel and unusual president would not be kidnapping children had he not convinced many people and many white males across this country that their continued success depended on stripping the dignity of women, Muslims, immigrants and people that don’t look like me,” he added.

US officials have said that fewer than half of 102 children aged five or under in their custody would be reunited with their parents before the deadline expired on Tuesday.

Also on Wednesday, demonstrators in the northeastern state of Connecticut gathered outside a federal courthouse to protest the government’s immigration policies.

They held signs calling for the abolition of ICE and Customs and Border Protection, and an end to the detention of families.