Will not abandon the country, even if jailed: Nawaz

Will not abandon the country, even if jailed: Nawaz 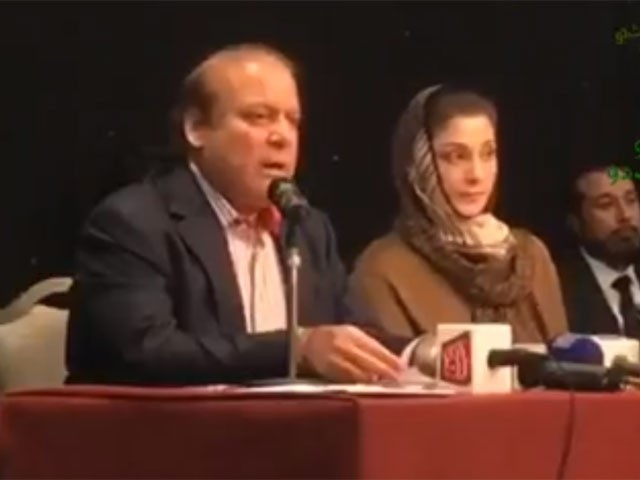 Addressing Pakistani community in London, deposed PM says he is coming back to restore 'supremacy of the people'. EXPRESS NEWS SCREEN GRAB

Deposed prime minister Nawaz Sharif on Wednesday said that he will not abandon the nation even if jailed or taken to the gallows.

Nawaz and daughter Maryam Nawaz will return home on Friday [July 13] to surrender to the National Accountability Bureau (NAB) following the Avenfield verdict. Addressing the Pakistani community in London accompanied by his daughter, the PML-N supremo said, “I am returning to my people because my country is in trouble.”

Those spreading propaganda that I’ve sought political asylum should know that I am coming back, he confidently said. The deposed premier further said that he intends to “honour the votes” even if he is going behind bars. Nawaz further said that his decision to return came despite the deteriorating health of wife Begum Kulsoom Nawaz.

“I owe it to the nation that elected me as prime minister three times.”

“We will restore the supremacy of the people,” Nawaz said, reiterating that there was no shred of evidence of corruption against him or his family. “The Sharif family has been facing accountability for three generations,” he added. There are two standards of justice; one for him and one for the ‘beloved’, Nawaz said, in an veiled jibe at Pakistan Tehreek-e-Insaf Chief Imran Khan.

On July 6, in a verdict which will echo across the political landscape of the country for decades, the accountability court hearing the Avenfield reference sentenced Nawaz to 10-years imprisonment and Maryam to seven years.