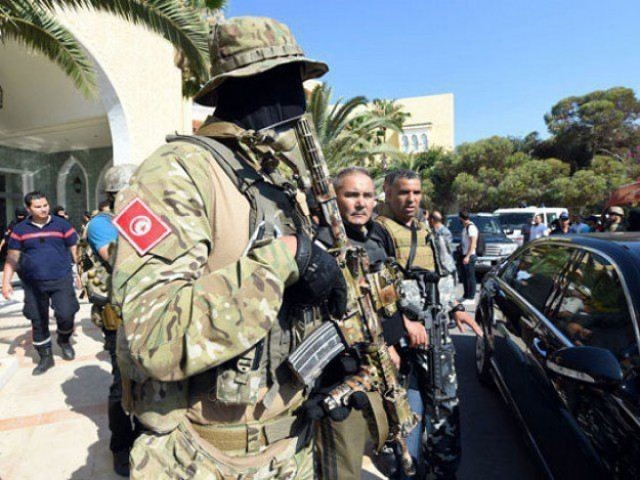 Tunisian security forces stand in front of the Imperial hotel in the resort town of Sousse, a popular tourist destination 140 kilometres (90 miles) south of the Tunisian capital, on June 26, 2015, following a shooting attack. PHOTO AFP

TUNIS: Six members of Tunisia’s security forces were killed Sunday in a “terrorist attack” near the border with Algeria, the interior ministry said, updating an earlier toll.

A national guard border patrol in the Ain Sultan area of the Jenduba border province “was hit in a landmine ambush that killed six agents”, the ministry said.

It said the attack took place at 11:45 am. Ministry spokesman General Sufyan al-Zaq said the blast was a “terrorist attack” and that assailants had “opened fire on security forces” after the mine exploded.

“Combing operations” were underway, said Zaq, who earlier told AFP that eight guards had been killed.

The attack, for which there was no immediate claim of responsibility, comes as Tunisia prepares for the summer tourist season.

Since its 2011 revolution, jihadist attacks in Tunisia have killed dozens of members of the security forces and 59 foreign tourists.

The country has been under a state of emergency since November 2015 when a suicide bombing in Tunis claimed by the Islamic State group killed 12 presidential guards.

Trump lawyer blasts Russia probe as ‘most corrupt’ ever