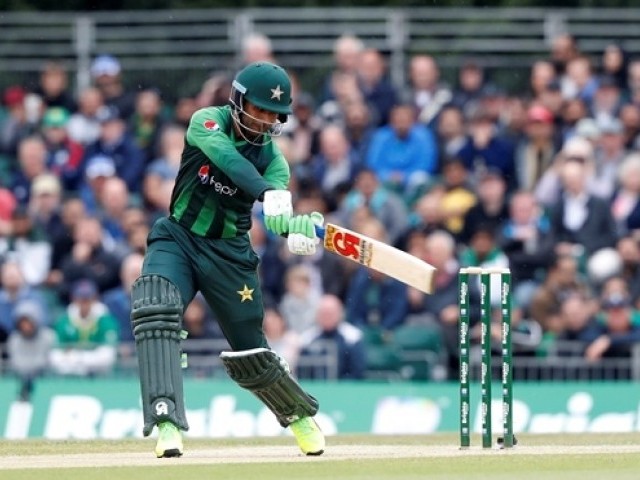 Fakhar Zaman scored 91 runs off 46 balls in the final of the T20I Tri-Series against Australia. PHOTO: AFP

KARACHI  : Fakhar Zaman — the man of the final and the man of the series — produced yet another master class to help Pakistan defeat Australia by six wickets in the final of the T20I Tri-Series and former Pakistan opener Yasir Hameed has thoroughly enjoyed what he has seen from the Mardan-born.

Fakhar made 91 runs off 46 balls to not only break the record for the most runs by a Pakistani in a T20I series (278); he also has the most T20I runs in the world for the current year.

Pakistan, who were 2-2 in the very first over, were saved by Zaman’s resilience and Hameed, who himself was an impressive opener for Pakistan, has praised the mentality with which Zaman bats, especially in big matches.

“He has not failed in any match and has carried the expectations, the pressure and the temperament very well throughout the series,” said Hameed. “He has always performed in pressure matches where most batsmen have failed. He played well in the Champions Trophy final match against India and now in this final against Australia; both are the top teams of T20 cricket.”

He further added: “The batsman who handles the pressure and doesn’t panic in pressure matches like these always succeeds and Fakhar’s genius is that he takes out the pressure from the game and helps the team reach their target.”

Talking about debutant Sahibzada Farhan, who got dismissed off the very first ball he faced when Alex Carey stumped him off Glenn Maxwell’s delivery, Hameed said that the batsman just got unlucky and backed him to perform well in the future.

“He is a pure T20 product; he hits hard and scores runs fast but today he was not lucky enough and had to leave the crease on the first ball. Asif Ali, however, has made the sixth and seventh place his and has given a lot of confidence to the team. His presence itself does wonders for Pakistan and that is just great to watch,” he said before adding that these players should be groomed further.

Meanwhile, former Pakistan batsman Imran Nazir has praised the team culture in the Pakistan side saying that everyone is there to back each other.

“Pakistan have played magnificently throughout the tournament. They have backed each other and even if one has failed, the other has supported him. That’s how a team should be and that is the team spirit with which Pakistan are playing nowadays,” Nazir told The Express Tribune. “They really deserve to be the number one team in the world in T20 cricket.”

Nazir went on to praise captain Sarfraz Ahmed for the way he runs the team.

“Sarfraz has led the team very well and the whole team is so synchronized. Although they didn’t bowl well in the final and also were poor in fielding initially, they still managed to come out of that pressure and reach the target; that is a sign of a maturing team,” he said.

Pakistan juniors reach knockout round of IBSF U21 World Championship