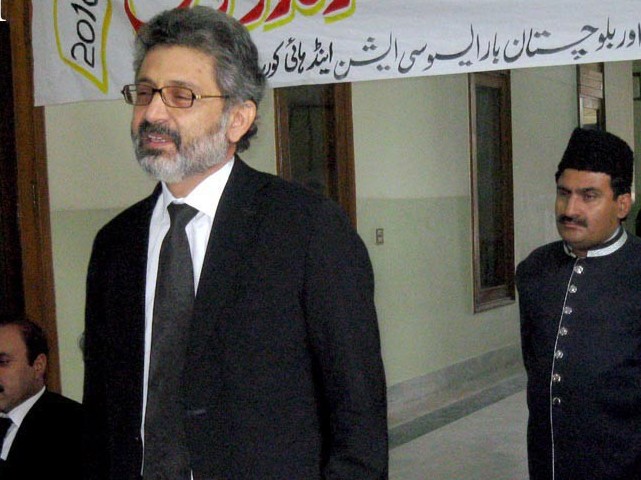 ISLAMABAD: Supreme Court of Pakistan in its detailed judgement regarding the plea against appointment of Justice Qazi Faez Isa has held that matter has become ‘past and closed transaction’.

The top court also noted that none of the fundamental right of the petitioner has been violated in this regard.

“It is cardinal principle of law that one cannot have a court of his own choice, therefore we are of the view that none of the fundamental rights of the petitioners have been violated in the instant matter. Thus the petition is not maintainable,” said the eight page order authored by Chief Justice of Pakistan Saqib Nisar, whose conduct was being severely questioned by Justice Isa for initiating public interest litigation during his tenure.

The three-judge Supreme Court bench headed by CJP on April 5 rejected the petition filed against the September 2014 appointment of Justice Qazi Faez Isa as an SC judge as well as his earlier appointment as the Balochistan High Court (BHC) Chief Justice in August 2009.

Two years ago, a petitioner Riaz Hanif Rahi had filed a constitutional petition challenging the appointment of Justice Isa contending that Balochistan chief minister’s advice was not sought by then-acting governor Aslam Bhootani for Justice Isa’s appointment as the BHC top judge.

The court has issued detailed order with reasoning. CJP while providing reasons regarding the dismissal of petition noted that the petitioners have failed to prove through refutable evidence that the advice of then Balochistan chief minister was missing regarding the appointment of Justice Isa as BHC chief justice in 2009. “Neither the said person was produced in the court nor was his affidavit to that effect was submitted along with the petition,” says the order.

CJP said that even when the act is done by a constitutional functionary, especially at the status of the governor of a province, there is a presumption that the act has been done in accordance with the constitution and law unless contrary is proved.

“When the appointments of the respondent both in high court as well as in this court (SC) are valid, there is no question of upsetting the seniority of this court arises,” he added.

The order also defended the advice of acting governor regarding Justice Isa’s appointment. The order said that in the circumstances, when all the judges including the Balochistan chief justice had resigned and the said court had become vacant, extra ordinary circumstances prevailed which required immediate attention.

The court noted that no one challenged his appointment as BHC chief justice during his tenure therefore, it has attained finality and also become past and closed transaction. Similarly, his appointment as SC judge cannot be challenged when he was elevated through Judicial Commission of Pakistan’s recommendation. “Needless to observe that the decision of the Judicial Commission is not justiciable before any forum, therefore the appointment of the respondent (Justice Isa) is lawful and valid.”

The court also noted that Article 196 of the Constitution is not attracted in the case as it deals with the appointment of a judge as an acting chief justice of the high court, which of course is temporary measure for filing up the vacancy to perform the day to day affairs till the appointment of a permanent chief justice. However, Justice Isa was not appointed as an acting chief justice or for limited period of time. Rather he was appointed on permanent basis.