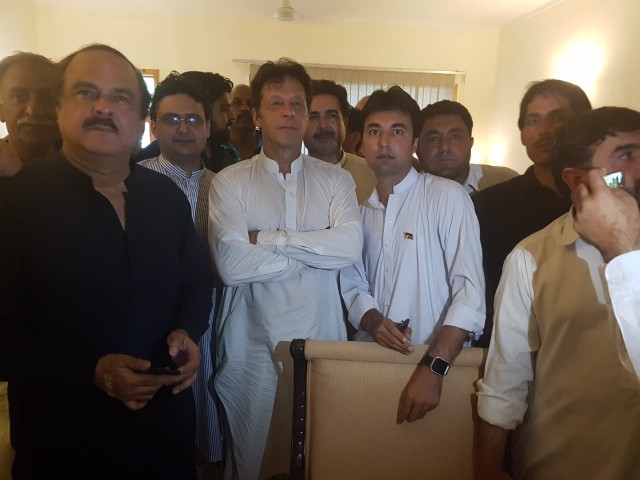 PESHAWAR: Referring to the decision of an accountability court that convicted former premier Nawaz Sharif and his family members, Pakistan Tehreek-e-Insaf (PTI) Chairman Imran Khan has said the powerful are being punished for the first time in the history of the country.

“I joined politics to change the situation in which only the poor people were being held accountable but the mighty ones went scot free and for the last 22 years, I have been fighting corruption,” said the PTI chief while addressing a huge public rally in Khyber-Pakhtunkwa’s (K-P) Swat district on Friday.

Imran said, “A Naya Pakistan will dawn on July 26 (a day after July 25 general election), a Naya Pakistan in which dacoits will be going to jails, not to the parliament.”

The PTI chief alleged that because of his struggle against corruption, the Pakistan Muslim League-Nawaz (PML-N)-led last government filed 32 cases against him in a bid to silence him.

Obliquely referring to the upcoming book of his former wife Reham Khan, he also alleged that the former premier Sharif provoked “a woman” to write a “dirty” book against him.

Lambasting Sharif, Imran said the former PM did everything to protect his “looted wealth” and even started criticising the Supreme Court’s July 28 verdict when the joint investigation team (JIT) was formed to probe the Panama Papers scandal.

“Sharif did everything to protect his looted money and targetted institutions, including the armed forces, besides calling Mumbai attack, an attack sponsored by Pakistan. This claim of his ultimately resulted in putting Pakistan on the FATF (Financial Action Task Force) grey list,” he stated

The PTI chief said Pakistan was emerging as an Asian tiger parallel to Singapore but Singapore managed to raise its per capital income from $300 to $50,000 whereas Pakistan is still struggling at $1,500.

“The only reason why Pakistan could not move ahead is violation of merit and destruction of state institutions, which were so weakened that they could not take action against the mighty.

“The National Accountability Bureau (NAB), an institution whose core duty is to arrest the corrupt, could not dare to arrest money launderers. However, it is the first time that the powerful are being punished,” he added.

Imran said he was happy that the people had showed up at his gathering which, he said, clearly suggested that the K-P people were happy with the PTI’s last provincial government.

“I am happy with my party’s performance in K-P. We could not meet all the expectations of the general public, but the PTI has learnt a lot and will not repeat mistakes.

“The Ehtisab Commission could not deliver as required but it will once the PTI comes to power after the July 25 polls,” he added.

On the revived alliances of religious parties like the Muttahida Majlis-e-Amal (MMA), Imran asked the people to question Jamaat-e-Islami (JI) – a former ally of the PTI and now a part of the MMA – as to why it supported the PML-N despite the fact that it had filed a case against its former president Sharif.

“When they come to your homes, ask them couldn’t they find anyone else other than the Jamiat Ulema-e-Islam (an ally of the PML-N) to form an alliance with for the next general polls?

“Don’t look at their faces but see who they are running for. There might be older and new faces, but vote for them; vote for the bat (the PTI election symbol) in the next general polls,” Imran added.