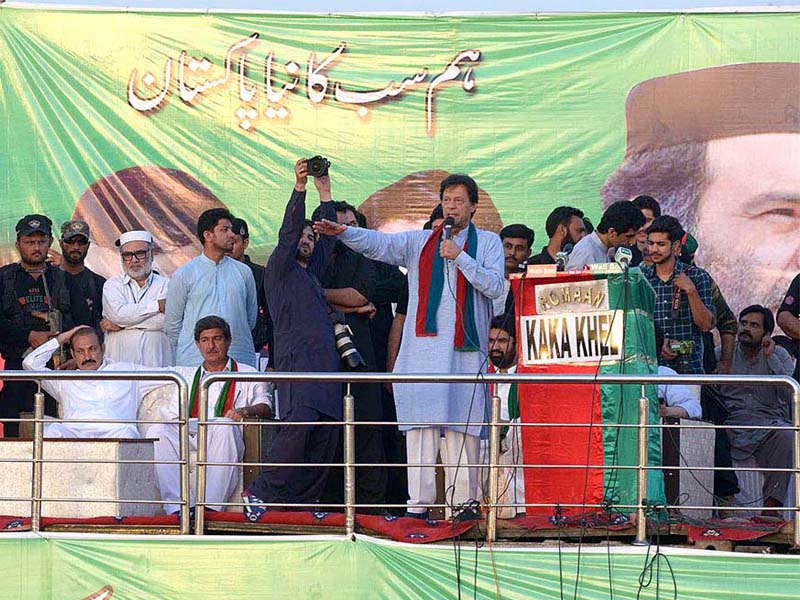 Praising the late Pashtun nationalist leader Bacha Khan, PTI Chairman Imran Khan said on Thursday that Bacha Khan’s was a great leader whether anyone believed it or not.

He was addressing a large public gathering here in connection with the upcoming general election.

While urging his party’s workers to criticize the ANP, Imran Khan said that no one should disparage Bacha Khan, whose son Wali Khan founded the ANP, currently led by Asfandyar Wali Khan.

Imran Khan, who had been critical of ANP and QWP leaders, said that sons of the leaders of both parties were contesting the election, signifying the hereditary political system in the country.

PTI, he said, was contesting against these two fathers and their sons in Charsadda in a bid to end this system.

Describing this trend to be akin to a monarchy, he said that the real reason for the downfall of the Muslim world was clinging to monarchies.

According to him, the West had adopted democracy after abandoning monarchy, but the trend was reversed in Pakistan, adding that we were moving toward monarchy and creeping away from democracy.

Lashing out against the hereditary politics, he said that it harmed the state while people chose leaders on merit in democracies

He went on to describe both Maryam Nawaz and Bilawal Bhutto-Zardari as leaders chosen on the principle of hereditary politics, adding that both knew nothing about how poor lived without having access to clean drinking water and other essential necessities of life.

Terming the Quaid-e-Azam a true democratic leader, he said that the Quaid had secured independence for the country through a democratic struggle.

Lashing out against Maulana Fazlur Rehman of the JUI-F, he said that he, his son and his brothers had distributed tickets for women’s reserved seats among their own family members.

Charsadda, he said, had been the victim of hereditary politics for the past three decades and PTI would defeat this trend.

Criticising Nawaz Sharif, he said that a major verdict would be pronounced against the PML-N leader.

According to him, Nawaz, who stole billions of rupees from the national exchequer, should be treated differently from a common thief.

The country, he said, had been extraordinarily overburdened by foreign loans, which he said swelled from just Rs6 trillion to Rs27 trillion over the past 10 years.

Accusing Nawaz Sharif of stealing Rs300 billion from the national kitty, Imran Khan wondered how he could demand to know why he was disqualified.

He also criticised NAB’s decision to put a moratorium on arrests people involved in corruption just because they were taking part in the general election.

PTI, he said, would strengthen the judiciary and NAB, enabling them to move quickly against people involved in corruption.

Promising to raise Rs8 trillion through new taxation measures to boost the national economy, he said that his party would also streamline education and health sectors.