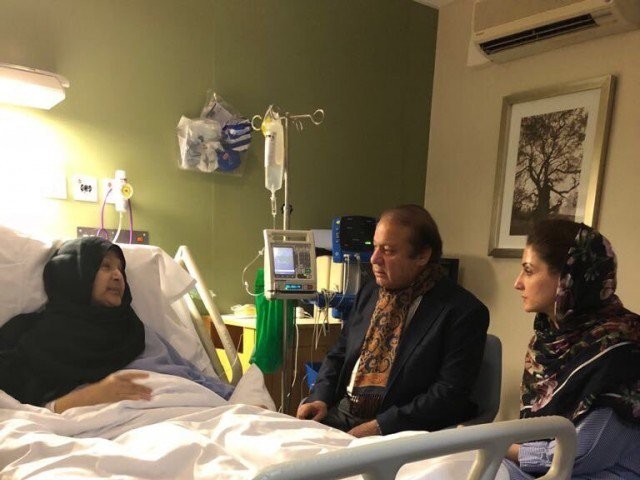 ISLAMABAD: Former prime minister Nawaz Sharif and his daughter, Maryam Nawaz, filed a petition on Thursday before an accountability court, requesting it to postpone the judgment in the Avenfield property case in addition to a seven-day exemption from personally appearing in court.

Judge Bashir is set to announce the judgment on July 6. He had reserved the verdict on July 3.

Judge Bashir is expected to take up both applications before pronouncing the judgment on Friday.

In the application, Sharif’s counsel contended that the applicant had travelled to London on June 14, for tending to his ailing wife, Kulsoom Nawaz, who is undergoing cancer treatment there.

Upon arrival in London, the applicant discovered that his wife had suffered a cardiac arrest; she had been put on a life-supporting ventilator before being shifted to the Intensive Care Unit (ICU), and she was in an extremely critical condition.

The applicant had intended to return to Pakistan if his wife had recovered sufficiently.

Unfortunately, however, he said, his wife was unconscious and still dependent on the ventilator system.

Due to the gravity of the situation, Sharif and Maryam said that they were once again left with no option but to extend their stay in London and remain with his wife/mother, respectively, till she regained consciousness and was no longer dependent on a ventilator.

Doctors, after taking the family’s consent, had performed a tracheotomy on her on July 3, he said.

The results of the tracheotomy are still awaited and Kulsoom is still on a ventilator, he said.

Both Nawaz and Maryam stated that when they received information that the Avenfield reference had been fixed for the announcement of “order/judgment on July 6, their immediate concern was to return to Pakistan to be present before the court at the time of pronouncement of judgment.

However, they said, considering all contingencies associated with the pronouncement of judgment in the case, they approached the team of doctors and sought advice on Kulsoom’s condition, and, especially, the likelihood of her gaining consciousness and coming off ventilator-support, so that in case of any likelihood of improvement in her condition in the near future, they may stay back just to be able to speak to her and satisfy themselves of her well-being, before returning to Pakistan for attending the court proceedings and the announcement of the judgment.

The petition also stated that doctors who were treating Kulsoom Nawaz held the opinion that her condition was improving and that they planned to reduce her sedation from July 4 and wake her over the next 48 hours. Also, the doctors had advised them that the “continued presence and support of her family was imperative.”

Under such circumstances, it added, the applicants had been constrained to extend their stay in London.

They requested the court to postpone the date of announcing the judgment in the reference for at least a seven-day period with effect from July 6, allowing the applicants sufficient time to return to Pakistan.