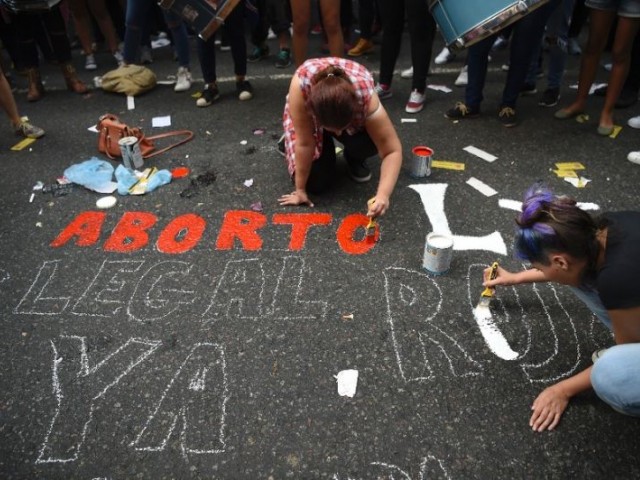 Pro and anti-abortion activists announced separate protests in front of Congress to coincide with the start of Senate discussions on an issue that has divided Argentine society.

Last month, the lower house Chamber of Deputies backed a bill decriminalizing abortion during the first 14 weeks of pregnancy, and beyond that in cases where the infant would not survive after birth, by 129 votes to 125.

Previously, abortion was only legal in cases of rape or when the life or health of the mother was at risk.

Although Argentina was the first country in Latin America to legalize same-sex marriage eight years ago despite strong Church opposition, abortion remained an even more sensitive issue in the staunchly Catholic homeland of Pope Francis.

A final debate on the matter will be held on August 8.

Argentina’s 72 senators are largely opposed to the abortion bill, although around 10 have not yet expressed publically their stance.

Liberal President Mauricio Macri pushed the bill through parliament despite making it clear he is “in favour of life.”

Anti-abortion protestors, backed by the Catholic Church, were due to hand over thousands of signatures to senators on Tuesday, asking them to reject the bill.

At the same time, pro-abortionists were due to take to the streets with banners and music to express their support.

Abortion remains mostly illegal in Latin America. Only in Uruguay and Cuba is it entirely legal, as well as in Mexico City, the capital of Mexico.

In most countries it is permitted only in cases of rape and where there is a threat to the life of the mother or if the foetus is disabled.

In El Salvador, Honduras and Nicaragua — traditionally Catholic countries but where Protestantism and atheism are on the rise — abortion remains completely banned.