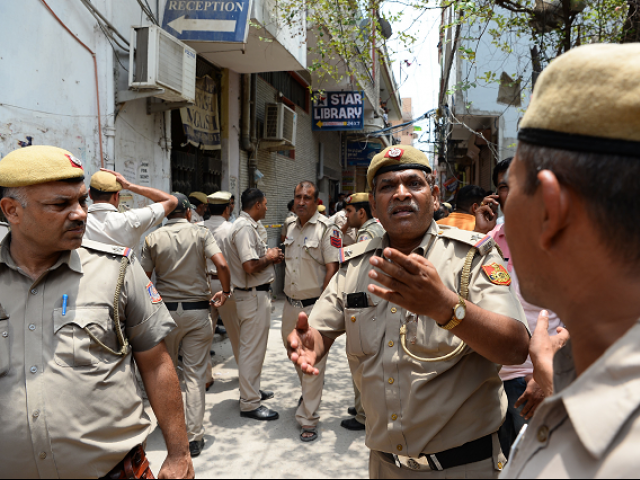 Police said the attack began after locals spotted one of the eight talking to a child after they disembarked from a bus near the village of Rainpada. PHOTO: AFP

NEW DELHI: Indian police said Monday they have arrested 23 people after five men were bludgeoned to death by a crazed mob in yet another horrific lynching to rock the country.

Local media estimate more than 25 people have been killed in recent months in similar cases sparked by false rumours spread on smartphones of child kidnapping or allegations of thievery or sexual harassment.

The latest incident saw eight men set upon in Dhule district, 330 kilometres from India’s financial capital Mumbai in the western state of Maharashtra on Sunday.

Police said the attack began after locals spotted one of the eight talking to a child after they disembarked from a bus near the village of Rainpada.

“They were confronted by the locals who had gathered at the Sunday market after suspecting them to be child kidnappers,” Dhule police chief M Ramkumar told AFP.

Three of them escaped but five were dragged to the village council office and beaten to death with sticks and blunt objects.
Police said they identified the alleged attackers from a video shot during the assault. Another dozen suspects were still on the run, they added.

Those killed were from Solapur district of the same state but some 450 kilometres away.

The current spate of lynchings started in May last year in eastern Jharkhand state after rumours on WhatsApp about child kidnappers led to the lynching of six men.

The rumours have since resurfaced, with attacks reported in at least 11 states.

The attacks — usually targeting outsiders — have left authorities scrambling to mount an effective response, with awareness campaigns and public alerts having a limited effect.

Last week a “rumour buster” official tasked with alerting the public to such hoaxes was lynched by a mob in the remote northeastern state of Tripura.