Thousa­nds of trees to be plante­d at Hill Park, says Akhtar­
By Our Correspondent
Published: July 2, 2018
Tweet Email 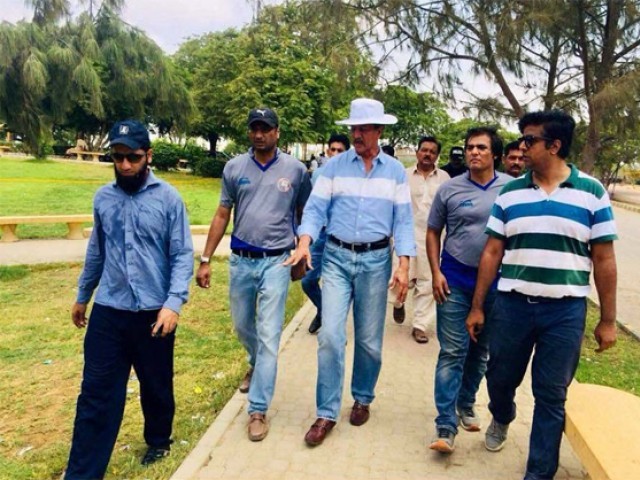 The mayor announced that the main lake and water fall in Hill Park will be restored. PHOTO: NNI

KARACHI: Karachi Mayor Wasim Akhtar has ordered the removal of water pipelines and other installations of the Karachi Water and Sewage Board (KWSB) from drains operating under the Karachi Metropolitan Corporation (KMC).  “Such lines create hurdles in the flow of water in these drains,” he said.

Akhtar, accompanied by KWSB managing director Khalid Shaikh, was on a tour to inspect various drains in the city to review their condition and progress of cleaning work. He visited Gujjar Nala, Orangi Nala, CBM Nala, Chakra Goth Nala, Nasir Colony 2100 Road Nala and other rain drains during the tour on Sunday. He also directed the contractors to ensure the immediate removal of all garbage that had been excavated from the drains during cleaning and de-silting exercise.

The Supreme Court had directed municipal authorities on June 9 to clean the sewers and storm-water drains across the city within a month. Chief Justice Mian Saqib Nisar had warned of strict action if the authorities failed to comply with the order within the stipulated time. Akhtar had assured that the cleaning drive would begin from June 14.

During the visit on Sunday, Shaikh assured that all possible help would be provided to the KMC for cleaning the drains.

Judicial commission orders payment of Rs1m to each DMC

Akhtar revealed that 54 excavation machines, 103 dumpers and hundreds of labourers were working to clean the drains. “No negligence will be tolerated in this work,” he said, adding that he would monitor the work himself and would remove the contractor if their work was not unsatisfactory. “We [KMC] will clean the major drains while the smaller ones will be the responsibility of the respective DMCs.”

Later, the mayor, accompanied by representatives of civil society and NGO, Shehri – Citizens for a Better Environment, participated in a tree-plantation campaign at Hill Park. Speaking on the occasion, Akhtar said that a sizeable amount of funds had allocated in the current budget for the uplift of Hill Park. The main lake and water fall will be restored and thousands of trees will be planted in and around Hill Park, he added.

Provincial minister for environment and information Jameel Yousuf, Begum Nilofer Fazlur Rehman and others also planted saplings at the site.