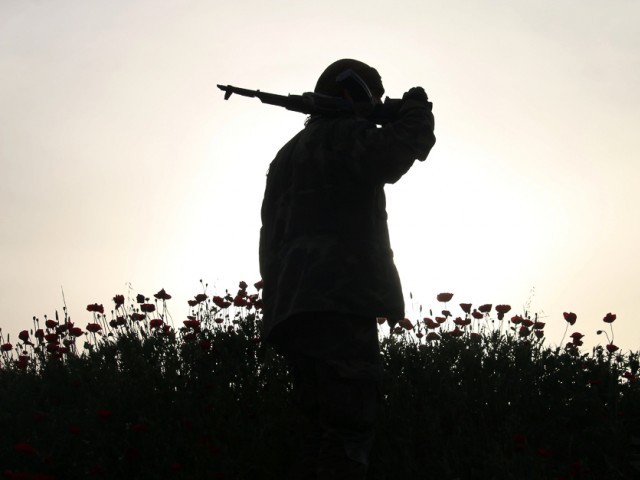 An opposition fighter walks in a field of poppies in a rebel-held area in the southern Syrian city of Daraa. PHOTO: AFP

“These include essential foodstuffs and drinking water,” she said, adding that aid had been distributed in the Daraa region across the border from the Jordanian town of Ramtha.

Supported by Russian air power, Syrian regime forces on June 19 launched an offensive to retake militant-held areas in the southern province of Daraa.

Ghanimat said the purpose of the aid was to help the displaced “provide for their basic needs within their own country”.

She called on the international community to “step up efforts to find a political solution to the conflict”.

Some 650,000 Syrian refugees have registered with the United Nations in Jordan since fleeing their country’s seven-year war which was sparked by peaceful anti-government protests in 2011.

UN chief appeals for end to fighting in south Syria

Amman says the actual number is closer to 1.3 million people and says it has spent more than $10 billion (8.5 billion euros) hosting them.
Jordan said Sunday it would be unable to host a new wave of Syrian refugees and that the border would remain closed, as Damascus escalated its bombardment on the southwestern region bordering the kingdom and the Israeli-annexed Golan Heights.

Retaking the whole of Daraa province would be a symbolic victory for the regime, as it is seen as the cradle of the anti-government uprising seven years ago that spiralled into civil war.

It would also allow the regime to reopen the Naseeb border crossing with Jordan and resume lucrative trade across the frontier.