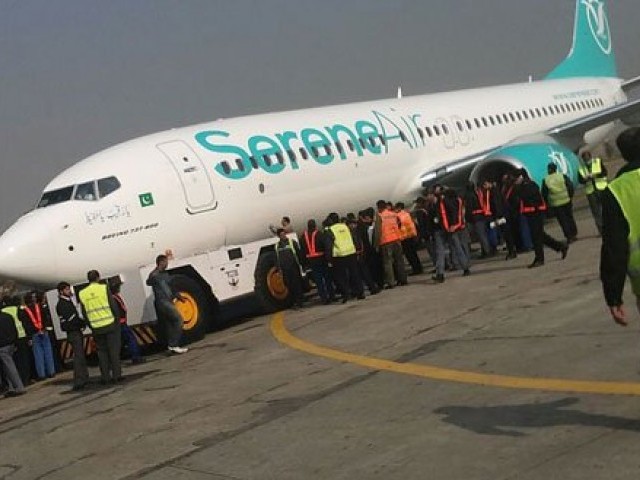 SereneAir is going to begin international flights in the next two months. It will target air traffic to and from Saudi Arabia. PHOTO: INP

KARACHI: SereneAir, which has operated flights on almost all domestic routes in Pakistan, is all set to enter the international arena by kicking off flights to the Middle East, which is expected to intensify competition in a highly lucrative and busy region for the aviation industry.

SereneAir is going to begin international flights in the next two months. It will target air traffic to and from Saudi Arabia.

A spokesman for the private air carrier acknowledged that SereneAir would commence international flights in the near future, but did not divulge details, saying dates for the beginning of flights and other details had not yet been finalised. International passenger traffic to and from Pakistan stands at 14 million per year, of which a major chunk flies on the Saudi Arabian route.

Except for a few routes covering Canada, America and European countries, major international traffic from Pakistan goes to Saudi Arabia for Hajj and Umrah whereas the kingdom also plays host to about 2.7 million expatriate Pakistanis.

SereneAir, which got a licence from the CAA in October 2016, will be the fourth Pakistani airline that will vie with Saudi Arabian airlines as well as three Pakistani carriers for attracting passenger traffic. It currently has three airplanes in its fleet and requires five planes to fly on international routes. Request for the remaining two has been placed.

PIA not to recruit pilots until SC verdict

The entry of a new player will enhance competition, leading to lower airfares and better service quality. With this, the market share of Gulf carriers such as Emirates, Qatar Airways, Etihad Airways, Air Arabia and Oman Air may contract. State-owned PIA has a dominant 22% share in the international traffic of 14 million passengers to and from Pakistan.

Revenue of SereneAir is expected to rise three times with the beginning of international flights as the airline is planning to fly round the clock on the Saudi Arabian route, according to sources familiar with the market. The expected reduction in airfares may give a boost to passenger traffic on the route.

“Lower fares will lead to an increase of about 6% in annual traffic on the Pakistan-Saudi route,” said Afsar Malik.

The only way to capture market share from other airlines was to push down fares in the beginning and enhance the quality of service, which it would certainly do as it did in the domestic market, he said.