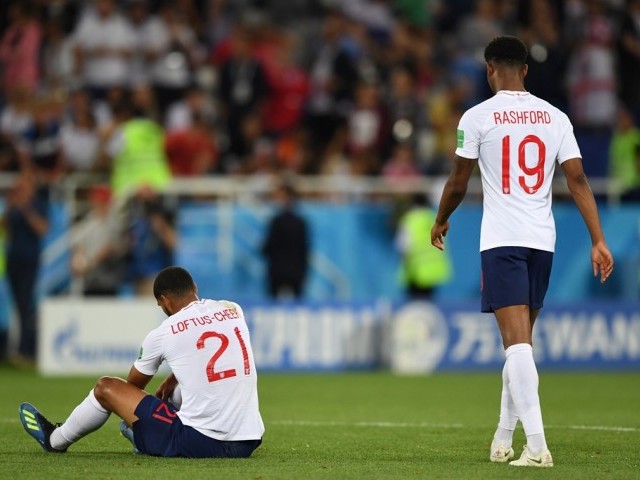 Disappointed: England midfielder Ruben Loftus-Cheek sits on the ground as forward Marcus Rashford walks past after their defeat to Belgium. PHOTO: AFP

KALININGRAD: England coach Gareth Southgate took defeat to Belgium on the chin on Thursday as he looked ahead to the country’s “biggest game for a decade” in the World Cup last-16.

England and Belgium went into their final Group G match having already sewn up qualification to the knockout rounds.

Belgium’s 1-0 win means they top the group and will face Japan on Monday, with runners-up England securing a last-16 date with Colombia 24 hours later.

“We want to win football matches so not happy to have been beaten, but what it means for the next rounds we don’t know. I felt this was a game we wanted to win but the knockout game is our biggest for a decade,” Southgate told British broadcaster ITV. “Tonight was a good test for us, but we had half an eye on the knockout stages.”

Southgate rested a cluster of players who had been involved in wins against Tunisia and Panama in England’s opening two games in Russia, including star striker Harry Kane.

Reflecting on the defeat Southgate added: “It was a pretty even game. I thought they had better control and possession than us in the first half. We had a couple of good chances in the second half. The players tonight never stopped, we’ve got to just keep improving.”